THE PRINCE OF PERSIA 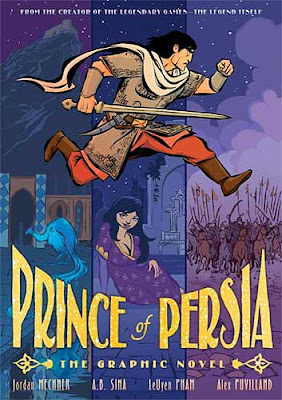 STORY SYNOPSIS
From the website: “Long ago in Persia, there lived a Prince – a man of honor, of valor, and full of strength – a man for his people, who lived with them and took on their trials and hardships. And he was loved.

His name is no longer remembered. When people speak of him, they call him merely, 'The Prince of Persia,' as if there have been no others, and his descendants are enjoined to live like him, to be like him, to the ends of their days.

Long ago in Persia, there were many princes, one following another, sometimes quick, sometimes slow, sometimes fat, clever, joyous, and all more or less honorable. And in some of those princes there shone the spirit of The Prince of Persia, for in Persia time spins like a wheel, and what is to come has already happened, and then happens again, year in and year out.

This is the story of two of those princes, and of the destiny that threads their lives together.”


REVIEW
A comic conceived from a video game seems as droll and trite as a movie filmed from the foundations of a theme park ride. I wondered about the PRINCE OF PERSIA after I procured it, as I did not realize the fact that it was first a video game when I chose it.

Luckily the good PRINCE surprised me with its complexity of intertwined story lines and princely theme of time threading through its people.

The story of our two princes – one from the 9th century and the other from the 13th – is brilliant and engaging. I was captivated by the art and felt the warmth of the sands on my face as I turned the pages. The story felt heroic and although the culture of the people is far removed from my own experiences in Missouri, I felt connected to the two princes (and the courageous princess), and I shared their disdain for the politics that withheld water from the people and spread disharmony in the region.

The PRINCE OF PERSIA caught me a bit off guard because after I learned it was the story of a video game I discounted it. I continued to pick it up and put it back down. Finally, this Thanksgiving, I decided to make my way through it.

Then the story hit me with depth and I was confused at first – shame on me for judging a book by its video game. I wasn’t really expecting see-sawing storylines, so it took a few pages to get the pacing, but once I did I looked forward to the switches.

I think the PRINCE OF PERSIA is a story that deserves a second reading. It is beautiful and metaphorical, speaking to me and my culture and my own politics in ways that were unexpected but prodigious.


The publisher and I disagree about the most appropriate age for this title. I tend to think the themes and literary worth is best suited for high school aged students. The text is not overly complex or challenging; in fact, the text is rather sparse in many places, allowing the art to take over. I find the themes to be deeper than most middle school students are prepared for.


BE AWARE
The text has more than one full-frontal infant boy nude scene, and one tasteful after-sex cuddling scene. There are also a couple of times when we see a prince on the commode.

IN THE CLASSROOM
Aside from the brief infant nudity and the implied sexual contact, THE PRINCE OF PERSIA has real literary worth in the classroom. First of all, students will make connections because of the video game notoriety. (I’ve never played the video game and cannot vouch for its appropriateness.)

I think students may be more likely to buy into the book based on the instant gaming connection and the upcoming movie, the trailer of which didn’t impress me a lot. I think the theme of time and the repetitive nature of human history is intriguing and embarks upon ideas in social studies, psychology, philosophy and mathematics. THE PRINCE OF PERSIA can help students parse out those broad strokes.