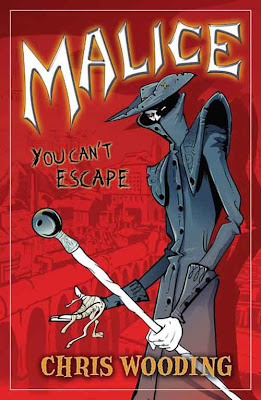 STORY SYNOPSIS
The malevolent and vile world of Malice is haphazardly captured in the pages of a comic by the same name. That comic is only known within the whispered rumors of teen circles, and it is only available from one hard-to-find comic shop in London. Only the craftiest of adolescents are able to obtain it. Those that dare will find the world of Malice is much more than a comic, much more than a rumor. It is a baleful existence that once the right words uttered and rites performed there is no escape from the tribulation of Tall Jake and Malice.


REVIEW
I stood in a dark bathroom with my best friend Charlie – in the basement of my home church during a lock-in no less – and I chanted thrice the name of Bloody Mary. We didn’t wait for her appearance. No sooner had the words dribbled from my 12-year-old quivering lips that we switched the light on and bailed from the room back into the sanctuary of church. We didn’t use that bathroom for the rest of the night.

The very idea that we had the courage to do such a thing was electrifying and man-reinforcing. Forget the fact that we bolted like cowards. In our minds (and in our stories to friends) we stood and laughed at the beast’s face. We lived to tell the tale.

Ghost stories, legends and folklore attract many a kid to embark on silly errands of bravado. It is exciting and scary and it makes kids feel strong and grown up even when they are nothing more than terrified children.

MALICE brilliantly taps into this universal passage from childhood to grown-up-ness, at least in the eyes of kids, by forming a story around a comic book, which acts as the gateway to the world of Malice. Instinctively, our logical sides tell us these stories are probably not real, but our mythological side still believes and that is what makes MALICE so terrifying and addictive. We want to believe this story, or one like it, is real – really real. I mean like-it-could-really-happen-dude kind of feeling.

Before you ever pick up a copy of MALICE you need to understand one thing: It is not a graphic novel. It is traditional prose with segments of comic chapters interspersed within – six comic chapters by my count, some of which last almost 20 pages.

Nonetheless, MALICE deserves its place in the ranks of comicdom because of its comic chapters and its heavy reliance on comics as a literary device. I loved this story and will be seeking out volume two when it is released, which will not be soon enough for me.


ART REVIEW
The art is purposefully and rightfully dark. Malice itself is a shadowy domain and a large portion of the book takes place at night. The inking and shading are so precise and the contrast so keen that the comic chapters are easy to make out and understand.


BE AWARE
This book is intimidating. Kids (not main characters) die in the book. Others experience permanent and profound emotional disturbances. Teens are kidnapped and brought to the world of Malice to live a pitiful and painful existence with virtually no hope of escape from the constant barrage of mechanical creatures that hunt and kill the humans for their souls.


IN THE CLASSROOM
Because the reading level is lower but the interest level is high (although I’d call it intense), MALICE would be an excellent book for any reader, especially reluctant ones or those who struggle to find works edgy enough for them to engage in and still be appropriate, but easy enough to understand.


OTHER INFORMATION
HAVOC, the second in the series, is coming soon.