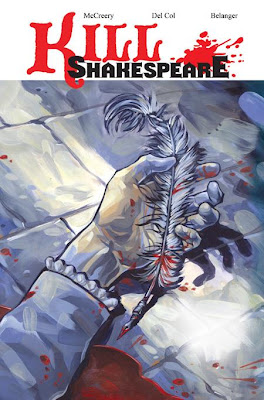 REVIEW
In the middle of a moss-cobbled stone room sits an iron cauldron bubbling with the sweat and suffering of souls. Around it stands the witches three, each with a bone to mix the pot. With their cackles they stir and chant and create their delicious abomination boiled on the backs of the bards of old.

They are the fates born anew, three modern goddesses of treachery, disgust and brilliance. Telling a story we know, yet know not, these new fates share an eye, a tooth and a yarn that is as beautiful as Roman paintings and as strong as Greek architecture. Beware, dear reader, for Conor McCreary, Anthony Del Col, and Andy Belanger are not just soothsayers or trinket sellers. They are conniving, insidious creatures who offer you -- the disciple, the reader, the Shakespeare teacher -- a companion to the Bard.

KILL SHAKESPEARE is a story worthy on its own, but as an educational tool it offers a new experience for study as a fictional myth built upon the original. KS calls forth the protagonists Hamlet, Othello, Juliet, and Falstaff and pits them against the antagonists Richard III, Lady Macbeth and Iago while Will plays the part of an apathetic creator/god. The juxtaposition of the KS story and the characters against the original plays is not only creative but genuinely academic. More to the point, it gives the school room scholar an avenue to explore the poet and his classics in new light and from new perspectives. KS could be read before, in conjunction with, or after the plays. Nonetheless, it should be read. If one chooses to exclude it from scholarly investigation, so be it. KILL SHAKESPEARE is a hoot and holler. I’m in hopes that teachers will see it for its academic benefit as well as its appeal to younger readers.

Fire up the cauldron, pull up a dusty leather chair, light a candle and fall in love with comics, story, and Shakespeare all over again.

BE AWARE
Bloodshed, apparitions, and complexity make this best for older teens.

OTHER INFORMATION
An educational companion to KILL SHAKESPEARE is forthcoming. We plan to review it when it comes out later this year, so keep your web browser peeled. 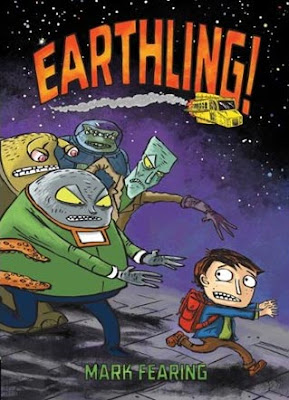 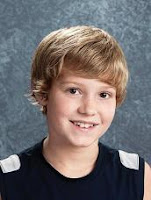 Great book! It starts out when a kid and his father move to a new house, a telescope lab. Someone surprisingly was sneaking in the house, kind of like AMULET vol. 1. His father then sent him to bed because he had his first school day in his new school. Then, the next day he got on the wrong bus. Unfortunately that bus was for a school in outerspace not his school. Then he meets a friend named Gort. The kid, Bud, told Gort he was an earthling. Earthlings were enemies to other species, but Gort liked him.

When he gets to the school he acts like a Temarian exchange student. But when gym class starts, they play zeroball, a form of basketball.

The whole time Gort and Bud try to find Earth signals. Will he ever come back? Read it, then you tell me.

I think EARTHLING needs a table of contents and chapter titles, but other than that, amazing sci-fi book! 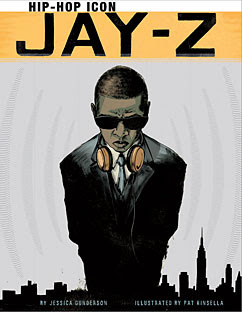 STORY SUMMARY
It’s no secret to anyone who knows music that Jay-Z (aka, Shawn Carter) remains one of the most powerful icons of pop culture today. His influences are everywhere from the ways he turned his rhymes into a business empire to the numerous protégés now on just about everybody’s iPod or radio (Rhianna, anyone?)

JAY-Z: HIP HOP ICON is a graphic novel look at Jay-Z’s life as a musician and a businessman. Told through the traditional lens of a reporter interviewing an artist who is talking about his life and his world, JAY-Z brings the reader into the rapper’s world as kid on the streets of Brooklyn, to his negotiations with record companies, to his launch of clothing lines, and into his world as a music producer with Def Jam Records. (There’s not much mention to his marriage to Beyonce, nor the media coverage of their newborn child, but you can get that by reading the news on any given day).

The writing of this graphic biography is sparse, but covers familiar ground. One nice element is the use of lines from Jay-Z’s song lyrics throughout the book. It’s like a musical notation to remind us of why he got so famous in the first place.

ART REVIEW:
I wasn’t all that impressed with the art in this book, but I did like the cover art. It shows a scowling, serious Jay-Z with headphones around his neck, standing before the backdrop of New York City skyline. Inside, though, the characters don’t seem all that defined, and the panels are sort of washed out.

FOR THE CLASSROOM
You know you have some Jay-Z fans in your classroom, right? They will love this look at this musical icon, and the book’s focus on how Jay-Z not only survived but thrived in a business that devours its artists is a message worth pointing out. Jay-Z followed his vision, and when he came to power, he brought others along with him.

One could also note that when he had money and influence, he used both of those to make changes in the world. In the music business, he reminded the old guard that rap and hip-hop were authentic forms of music, and should be recognized as such. In the world, Jay-Z has consistently reached out to help charitable organizations, using his name recognition for good.

The Capstone website offers the corresponding standards categorized by state, making this title easy to incorporate into the classroom curriculum. Here are the Missouri standards:

Communication Arts 2007 Grade and Course Level Expectations Grade 5, Reading
3. Develop and apply skills and strategies to comprehend, analyze and evaluate nonfiction (such as biographies, newspapers, technical manuals) from a variety of cultures and times

MY RECOMMENDATION
I recommend this book, and think it is appropriate for middle and high school classrooms. There is no profanity or inappropriate material in here, although if a reader becomes a listener to Jay-Z, they should be prepared for language of the street.
Posted by admin at 9:53 AM No comments: 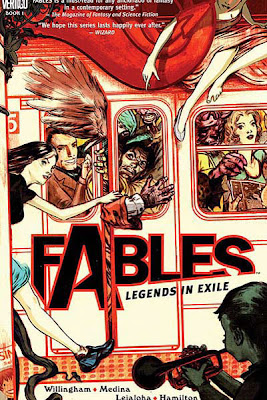 By Catharina Evans
Staff Writer
STORY REVIEW
The premise of this oft-touted series places “exiled” fables in contemporary New York City to live among the “mundanes” (i.e., real people). In FABLES: LEGENDS IN EXILE, characters from a spectrum of universes, both film and literary, mix uneasily together. In this upside-down world, Snow White reigns, Prince Charming comically bumbles around as an obnoxious lady-killer, and the Big Bad Wolf does good as Sheriff.
In Volume 1, Sheriff Bigby (wolf of “Three Little Pigs” fame) discovers the trashed and bloodied apartment of Rose Red, Snow White’s sister. A classic whodunit search for Rose’s killer ensues, only to end with the revelation she staged the crime scene herself. 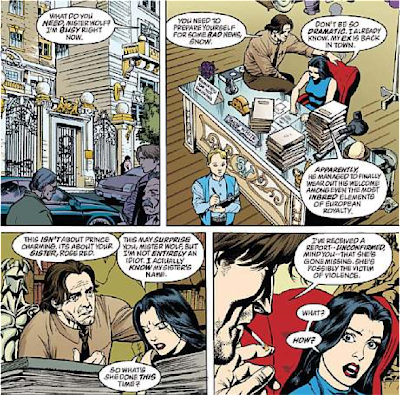 Along the way, writer Bill Willingham treats the reader to cameos by a variety of childhood friends, from Beauty and the Beast to characters from the Kingdom of Narnia. Unfortunately, the delight one feels upon seeing these bedtime story staples re-imagined does not compensate for FABLES’s flabby story line.
FABLES attempts, but fails to succeed, in maximizing its potential for rich and subtle satire. The concept of escaped fables living in Manhattan, trying to ruse mankind into thinking they are “mundanes” (humans) begs for social and cultural commentary; however, FABLES leans on a familiar “detective mystery” trope that refuses to capitalize on the metaphoric possibilities of its characters.
ART REVIEW
Penciller Lan Medina has mastered an aesthetically pleasing, realistic style featuring clean lines and an easy to follow lay-out. Generally, the panel arrangement and sequencing work to facilitate Willingham’s story-telling. The image-text relationship functions well and boasts an elegant, if sometimes redundant, rapport.
IN THE CLASSROOM
FABLES may have potential as a fun tool for exploring the concepts of archetypes and common mythologies, or even as an example of how commonly told tales may be re-imagined. 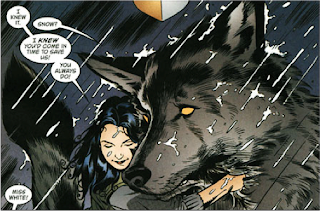 Most students should be familiar with the series’ main characters; thus, looking at Willingham’s interpretation and expansion of their backgrounds and personalities could provide material for teaching character development. Willingham takes some of the most one-dimensional personas of Western literature and film and imbues them with tragically human characteristics.
OTHER INFORMATION
Author: Bill Willingham
Pencils: Lan Medina
Ink: Steve Leiloha
Letters: Todd Klein
Color: Sherilyn van Valkenburgh
Publisher: Vertigo (December 1, 2002)
Genre: Fiction
Format: Paperback
Pages: 128
ISBN-13: 978-1563899423
MY RECOMMENDATION
For purposes of studying visual story telling and character development in high school or university classrooms, I can recommend FABLES. It offers some mature themes which may be inappropriate for elementary and middle school readers.
Posted by admin at 9:46 AM No comments: