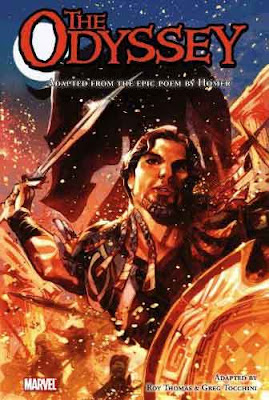 
“Sing, O Muse, of that ingenious hero Odysseus who traveled so far and wide after he had sacked the sacred citadel of Troy. Many were the wonders he saw, and much did he suffer by sea, while striving to bring himself and his men safely home to wives and families.

First hounded by Poseidon, god of the sea…then detained by the amorous goddess Calypso in her hollow caves…Odysseus was the only one of Troy’s conquerors still alive who had not yet reached his homeland after twenty years away.”


From the first narration box to the last, Roy Thomas’ faithful adaptation of another of Homer’s epic poem rings clear and true to the source material. Unlike other works (The Iliad), or other adaptations (ODYSSEUS: ESCAPING POSEIDON’S CURSE) Homer’s tale of Odysseus and his family (both the original and this adaptation) is told, not in linear fashion, but mostly in a series of flashbacks – retellings.

Thomas mentions this in his introduction, lamenting the fact that in most comic or movie versions Penelope (Odysseus’ wife) and Telemachus (his son) are all but forgotten. However, these two characters play an important role in the overarching narrative and it is the “balance” between all three that Thomas worked to restore. He did it with expertise.

The reason THE ODYSSEY works – and works so well – is because of the interplay between the writing and the art. I often stopped and scanned a page or multiple pages before ever reading a single word, deciphering what I remember of Homer’s poem from my Freshmen Studies literature class in 1991 and subsequent readings of comic adaptations. Then I went through and read the words, building connections and forming the story in my mind. I even went back and reread pages that enamored me, stopped me, confused me, or surprised me. I love being surprised.

The act of reading THE ODYSSEY was more than a classroom review, more than a get-through-it act of necessity. I experienced the adaptation because of the importance of the story on Western civilization and I was filled with romantic ideals of beauty and loyalty, and I was reminded of the importance of intellect over force, cunning over rage. Of course, the story also cautioned me about the dangers of falling prey to temptation and impulsivity.

Thomas was only one piece of the important duo. Artist Greg Tocchini superbly crafted his art bringing to life not only the beauty of the human body but the imagery of Homer’s story. There were pages that stopped me dead and forced me to bath in the art-story. The second page of the Cyclops story had a splash page that mesmerized me.

I’ve seen other renditions of Polyphemus and none have come close to capturing my vision of Poseidon’s son. Tocchini created a Cyclops who was terrifying and menacing without being grotesque or deformed. Polyphemus is likely a handsome creature as far as Cyclopes are concerned and his tattoos and necklace give him personality and depth.

Odysseus’s venture into Hades to speak to the Thebian prophet Teiresias was especially harrowing. There he dug a trench a cubit in length, width and depth, and into which he poured honey, milk, wine, white barley meal, and goat’s blood. Any ghost who drank from the pit could hold counsel with Odysseus, and the rich blood poured from many a damaged soul, dripping and spilling from the green-hued phantasms and onto the ground.

When Odysseus is done hearing the prophesying of Teiresias, he seeks out his mother and entices her to drink, asking her about his father and son. The scene is painful and poignant when she vaporizes as he tries to embrace his mother one last time. The visuals are captivating.

There were a few pages – half a dozen – there were not only sketchy and overly inked but surprisingly out-of-style with the rest of the book, giving the appearance of a different artist (either penciler, inker or both) and pulling the reader out of the story.

With that exception, the writing and illustrations are breathtaking and fluid, giving the reader a beautiful narrative to experience and treasure.

THE ODYSSEY is a bloodthirsty tale filled with politics, plots, wine, death and sex. The goddesses are gorgeous and sometimes buxom. The men are well sculpted. The characters – male and female – are, in Greek tradition, loosely clothed. Furthermore, Thomas did not cleanse the story of the bedding of Circe, Calypso, or the wedding chamber of Odysseus and Penelope. Neither did he scrub the death, backstabbing and wicked nature of humankind from the narrative.

I am glad that Thomas and Tocchini created a true adaptation of the ancient story. The nakedness and violence is tasteful and appropriate for the story. It does, however, give pause to the use in classrooms.


IN THE CLASSROOM
I have often promoted the idea of teaching twin texts in the classroom. In my case, I am specifically referring to the teaching of an original text in tandem with a comic adaptation. I cannot stress the importance of this more than with THE ODYSSEY. This graphic novel is outstanding and would, undoubtedly, give rise to authentic connections between students and story.

My experience in speaking with comic lovers has given me a strong connection between reading motivation and the discovery of above-grade-level or even inappropriate comics. That is to say, I have, many times, heard comics lovers remember a beloved comic that significantly impacted their life. Often, that comic would be considered inappropriate for them at the age they read it. There is something to reading inappropriate material that sparks the imagination and spurs further exploration.

I am not suggesting that we give elementary students unfettered access to Marvel Illustrated’s THE ODYSSEY. I am suggesting, however, that a very few young students – gifted, bored, heretofore unconnected and disengaged with education – may be reached by giving them works that would otherwise be considered too old or inappropriate for the grade level. Of course, any such attempt would need to be approved and signed off by parents/guardians and the principal.

As studies are beginning to show that thoughts of drop-out may begin as early as fourth grade, we should keep our options open and be thoughtful when it comes to educating students who might be at risk for abandoning education.


CHRIS’ RECOMMENDATION:
Highly Recommend with Reservations
Together, Thomas and Tocchini sculpted a beautiful piece of art and literature, which readers may study for years to come.

It is my opinion that Marvel’s adaptation is important to the understanding and appreciation of the classic text and it should be used in schools; however, I understand that it did receive a Parental Advisory from the publisher and should be carefully scrutinized before giving it to students.