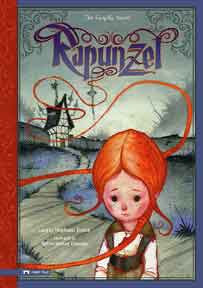 REVIEW
If only the wife had not longed for the beautiful rampions so much during her pregnancy, the story of Rapunzel would have turned out differently. As it stands, the German adaptation of RAPUNZEL, as recorded by Jacob and Wilhelm Grimm and adapted by Stephanie Peters, is a tragic fairy tale that ends with the redheaded maiden saving the prince.

The unnamed husband and wife were expecting a child when the mom-to-be coveted the rampions at the neighboring witch’s home. So the man stole some for his wife to eat, but her appetite was not satisfied. The second time the man was caught and forced to give up his first born to the witch.

When the child disobeys her magical mother, the witch banishes the youngster to the tip-top of a doorless tower to stay forever. As we all we know, a prince rides by and makes his way up the tower by climbing Rapunzel’s long hair. The witch eventually discovers the girl’s second disobedient act and transport her to a desert, then tosses the prince from the tower. He falls into a thicket below blinding him forever.

I didn’t remember this part of the fairy tale. I recalled the prince coming along and asking Rapunzel to let down her hair (which I remembered as being golden, although I thought the red hair added a nice visual element to the illustrations). My recollection was that the prince saved her and they rode off into the sunset. To my surprise the story continued.

The persistent Rapunzel made another new life after wandering in the desert and coming upon a stream. There she built her home and had the princes’ twins. The children grew and Rapunzel wowed them with tales of their beloved father. Amazingly, he stumbled through the world and happens upon the trio, recognizing Rapunzel’s beautiful singing.

Crying ensues and without explanation, Rapunzel’s tears magically heal the prince of his blindness and the family live out their lives happily and without witchly incident.


ART REVIEW
The day I got this book – with a stack of others – I instantly singled out RAPUNZEL: THE GRAPHIC NOVEL because of the art. I sat all the others books down and admired the book. Something about the muted color pallet combined with the striking red hair and vibrancy of Rapunzel made me stare at the cover endlessly.

The style is obviously German, down to the clothes and facial characteristics of the characters. Every element of the art screams read me, experience me, enjoy me. I did.


BE AWARE
Rapunzel and the prince did have babies, yet they did not get married, at least not in any official manner. It is clear they loved one another and were meant to be together. That might bother some folks even though some version of the story has been around since the 1600s.


IN THE CLASSROOM
Fairy tales have been a part of our literary tradition hundreds of years. They are great yarns and kids can still enjoy these very old stories from long ago and do so in modern and interesting ways.

The book offers the history of Rapunzel, discussion questions, a glossary, and writing prompts. Personally, I think it would be fun for kids to create their own fairy tales (in traditional or comic format) and utilize those writing techniques we promote. I also think it would be fun to read different versions of the story.