THE STORM IN THE BARN 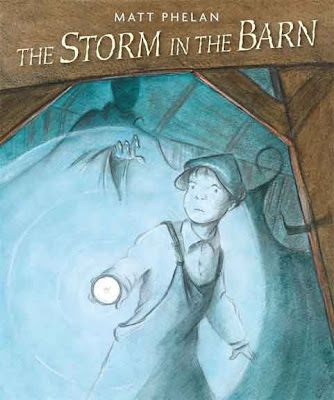 
STORY REVIEW
THE STORM IN THE BARN is a dustbowl fable by Matt Phelan set in Kansas and told more in illustration than in text. This graphic novel contains historical highlights but also is infused with a creepy ghost story in which the main character – 11-year-old Jack Clark – must overcome his fears of an abandoned barn in order to confront the powerful spirit known as Storm that controls the rains.

This was one of those books that, once I began, I had trouble putting down. I cared about Jack, who is bullied by other kids in town and whose family struggles to survive the drought of 1937. Jack feels protective of his sisters – one of whom is very sick with a coughing illness that has her bedridden, and the younger one who wanders off into trouble. Jack is also accused of having something called "dust dementia" and he needs to find his way back to some sanity through his adventures.

By the end of the story, when the rains finally arrive thanks to the bravery of Jack, the scene in town is one of jubilation and Jack's very complex relationship with his father finally reaches a satisfying end with the simple act of a hug between them. (One scene where Jack watches the men of town -- including his emotionally distant father – massacre a herd of Jackrabbits who have been destroying crops is particularly intense as the men's violence against the defenseless animals turns to pity on the men's faces in the aftermath of the event.) And the rains mean that Jack's family will stay on their farm and try to make it for another year instead of packing up and moving out.

ART REVIEW
Phelan expertly captures the open plans of Kansas and the despair of the farming families with his washed out water colors in this fantastic book. His use of pacing with the story and opening up the world with the art (perspectives play a big role in the illustrations here) perfectly capture the time period and the eeriness of the Storm spirit that Jack finally encounters and confronts on behalf of his family and community. The Storm is a huge, swirling, dark form of a thing and certainly will creep out the reader as much as it creeps out Jack.

You can also watch the book trailer video on YouTube.

IN THE CLASSROOM
THE STORM IN THE BARN is a fantastic example of historical fiction within the graphic novel genre, tapping into the setting of the Dust Bowl days to tell the fable of why the rains have not arrived. The book could have a place in the study of the Dust Bowl or, as writers, students could create their own magical fable set in some other time period of the United States.

I think an interesting discussion with this particular book is how large a role the illustrations play in the story. The book may be almost 200 pages long but I expect all of the text would fit on one piece of paper. The intersection of art and writing might make for a deep conversation about the production of such a book. In addition, an extensive note from Matt Phelan at the end of the book explains the genesis of the novel and how he came to be inspired to tell the tale of Jack and the Dust Bowl community. I like how Phelan brings us into the mind of the writer on a journey to story creation.


MY RECOMMENDATION
I highly recommend this book as both an historical document and as an exemplary work of graphic fiction. There is nothing inappropriate in this novel although the killing of the jackrabbits is a tender point for sensitive readers. The book would be right at home in a middle or high school classroom. It might be suitable for an elementary classroom, too, for more advanced readers.

This looks like an interesting read! I was just thinking I needed to add a graphic novel review to my blog Ink Spells, which looks at finding good books for advanced readers, ages 8-12. In particular, I just recently posted about how to keep boys reading, and I thought the graphic novels are a great approach for reluctant readers, at either end of the reading level spectrum.

Great review, Kevin. I couldn't agree more. I convinced my school library to purchase the book solely on your review, and I was not disappointed as I read it over break.

In fact, I decided to review it over at my new site as well: www.itmightblowup.blogspot.com