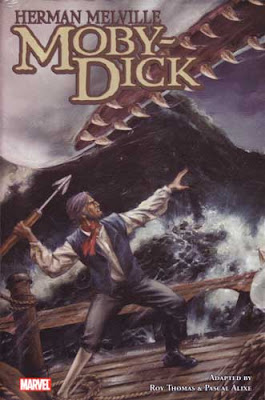 
STORY REVIEW
Writer Roy Thomas is fast becoming one of my favorite comic authors. His love and appreciation for traditional literature combined with his commitment to introduce old works to the 21st Century student – who is all but contemptuous for canonical texts – breaths excitement and energy into the world of literature. Thomas’ introduction to MOBY-DICK makes the reader excited to devour Melville’s rich novel – the comic adaptation electrifies even more so.

The preservation of the story and the literary elements make for a perfect introduction to the 600-page novel. Much of the descriptions of whaling are absent and certainly, confessed by Thomas himself, the comic has a higher percentage of text devoted to the actual climactic end than the original.

After finishing the comic I felt an intense desire to speak, to discuss, to argue about the experience and the deeper implications and literary themes therein. I want so badly to share with someone who knows and understands. A comic that invokes such emotion is worthy of study. It makes me want to take a class on MOBY-DICK.


ART REVIEW
It is quite a feat to illustrate a 144-page graphic novel whose scenes take place primarily aboard the same vessel and still keep the visuals fresh and unique. Alixe takes great pains to alter the perspectives, change the layout, and adapt the color palette, giving us an enriched experience that never tires.


BE AWARE
In the beginning, Ishmael needs a room and seeks out a cheap inn, but the inn is full. The landlord offers Ishmael the chance to share a room and a bed with another guest, the South Sea cannibal Queequeg. Contemporary students living in a sexually aware culture will interpret this incident with homoerotic overtones, although it is symbolic of their friendship and not sexual. In fact, their plutonic relationship is major theme, a key component, to the novel as the two develop a significant friendship, which is in direct contrast to the self-centered and single-minded nature of Captain Ahab.

IN THE CLASSROOM
I told my daughter I was reading MOBY-DICK (a name that is perplexingly hyphenated on the cover yet unhyphenated in the text) and the 8-year-old nodded her head in agreement. I asked her what the story was about and she told me it was about a guy who wanted to kill a white whale. She then perused the book seeking out the pages where Moby Dick is illustrated.

Deep within our American culture there is an awareness of MOBY-DICK and a bit of curiosity surrounding the maddening quest for it’s white hide and – from Ahab’s perspective – its black-blooded soul. A fool’s journey, yet somehow Ahab is capable of convincing the crew the journey is their destiny and to forfeit their souls in the search of what is for Ahab the manifestation of evil.

If any a canonical text is relevant in today’s environment, MOBY-DICK is it. Once students read the comic adaptation and discover the virtue of the story and its connection to their lives, I think they will be easily convinced to read the original. Using the comic adaptation and the traditional novel as twin texts in a high school literature classroom would help reinforce those bonds between old and new and give the students the proper scaffolding to truly appreciate the magnitude and richness of the story.


CHRIS’ RECOMMENDATION
Highly Recommended
I cannot stop thinking about this story and analyzing the larger ramifications and connections to modern politics, religion and cultural divisions. What better reason to highly recommend a comic than one that permeates the mind and demands attention and excitement?