BOYS OF STEEL: THE CREATORS OF SUPERMAN 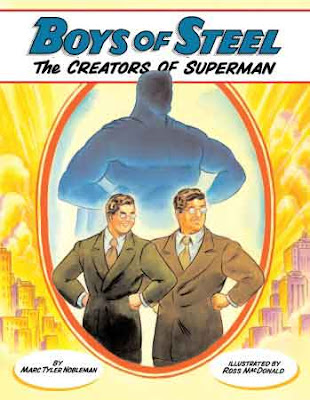 
REVIEW
BOYS OF STEEL is the rallying cry for misfits and oddballs; it is the biographical badge of honor for geeks and nerds who reject the social constructs of normalcy and seek their own pilgrimage despite the pitfalls and rejections ahead. For Superman creators Jerry Siegel and Joe Schuster, their own heroic journey – while it changed American culture – left the two destitute.

Both boys, short and spectacled, were uninterested in sports, painfully shy and awkward around females. Yet, the boys lived exciting lives: Jerry in the pages of his hero-filled, adventure and science fiction pulp novels, and Joe through the manipulation of pencil and paper.

One night, Jerry conceived a modern hero who gave hope to a people. This super man was a caped hero who, at times, also donned a weak exterior – representative of the two boys – in order to blend into and hide from society. Superman was born.

Action Comics #1 hit the shelves in 1938, brining hope to a people heading to war. The comic story stops there, but the afterward gives the rest of the tragic tale behind the creators. Selling Superman to DC Comics for $130, the two eventually lost all rights to the character, were fired from DC and found their names stripped from the comic. Thankfully, however, some resolve has been established and their names have been restored as the rightful creators of Superman.

It is a sad story of greed, but an important story to the creative and nonconformist. In the end, Superman changed the American landscape becoming one of the most recognizable, iconic figures in pop culture.


ART REVIEW
As one might expect, MacDonald tapped into the Golden Age of comics in this picture book-comic hybrid. The 1930s era rendition resonates with history and honor, treating the characters with reverence.


AGE RECOMMENDATION
Chris’ Rating: Ages 8 and older
The text on the pages is a bit lengthy for very young children, but should be fine for most readers beginning around age 8.


IN THE CLASSROOM
What better way to introduce biography to children than to learn the story of the creators of Superman, an iconic character to children and adults alike? Those students who do not fit the typical mold will cling to Siegel and Schuster, and their accomplishment. Of course, it is also a cautionary tail about the importance of intellectual property. With the increase of legitimate research being conducted beginning in the elementary classroom, BOYS OF STEEL demonstrates the importance of not stealing someone else’s work.


MY RECOMMENDATION:
Highly Recommended
BOYS OF STEEL: THE CREATORS OF SUPERMAN is a title your comic library simply cannot be without.