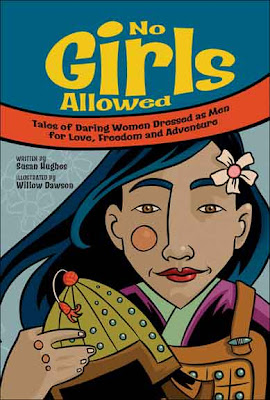 
STORY REVIEW
The subtitle of this new graphic book from the Kids Can Press publishing company says it all: "Tales of Daring Women Dressed as Men for Love, Freedom and Adventure." It's a mouthful for a subtitle, but in fact, this book examines an important yet un-mined element of history of women and girls who were fed up with being told "no, you can't do that" because of their gender and decided that taking on a male disguise would open up doors for them. Many of us know the story of Mu Lan, the girl warrior from China who went into the army to protect her father, thanks to the Disney-fication of the story (which is also retold here with more restraint) but there are many more women just like her, apparently.

The seven stories in this book shed light on the difficulties that women have had for respect and esteem in history and the first story about Hatshepsut reaches back to the days of the Egyptian pharaohs, where men ruled the roost. Hatshepsut, however, took over the rein of her father's lands when he died and did many great deeds, according to this book, before meeting an unknown end (probably murdered by her nephew, who became the new pharaoh after her).

The book then moves along a chronological timeline, spotlighting women in Europe and then in America, including the courageous Ellen Craft, a black slave from the south, who impersonated a white man in order to escape to freedom with her lover. These stories show great attention to detail and bring to the forefront the problems of male-dominated societies that do not honor individuals for their talents, only for their gender. As the writer Susan Hughes notes in her afterward: "Bravely, desperately, each woman made the same radical leap for freedom.... There would be dire consequences if she were discovered; each considered the risk worth taking."


ART REVIEW
Writer Susan Hughes is joined with illustrator Willow Dawson, whose black and white illustrations are a perfect match for the text. Slightly understated, the pictures tell as much of the story as the text. The reader is brought right into the moments when the decision is made by these women to hide their true selves, take on a new identity and hope they don't get discovered. Dawson shows us the looks on their faces as they venture out into the world that would reject them and the expressions of concern and happiness are vivid.


FOR THE CLASSROOM
I worry that the title of this book – NO GIRLS ALLOWED – will turn off the very population that should read this book: boys. I assume that girls would have no problems identifying with the protagonists of these stories and would find interest in the ways that the heroes here shift identities. But, given that gender inequality still exists (albeit with many improvements over the years), the audience that could make a difference in the future world are boys. And my guess is that no boy who should read this book would be caught reading this book. And so, perhaps teachers can find a way to introduce these stories as a class, so that boys will have an excuse to learn about these strong women from history.

The publishers also provide a nice index of additional resources about the women in the book, and as writer Susan Hughes notes, "There are many more equally fascinating stories of women in disguise that just couldn't fit into the pages of this book...." Maybe students could research some of those women, and also talk about why it is that during Shakespeare's days, men had to dress as women for the stage even though there were perfectly fine female actors available. Students could also write about the inequity that they see in their lives and how one might overcome those difficulties. The book opens up a lot of possibilities for rich discussions.


OTHER INFORMATION
Click here for the publisher’s learning materials.


MY RECOMMENDATION
I highly recommend this book. It would likely be most appropriate for upper elementary and middle school students, although there is nothing inappropriate in its content.