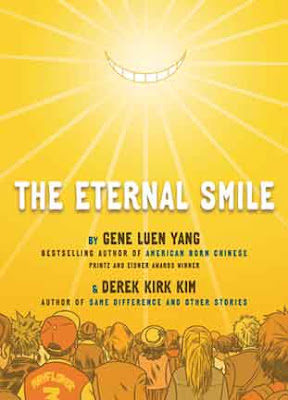 
STORY REVIEW
Teachers looking for a weapon, any weapon, to pick up in the are-comics-real-literature debate have always had a few go to Battle Axes: MAUS, PERSEPOLIS, and AMERICAN BORN CHINESE. Gene Luen Yang's shifting, genre bending, National Book Award finalist graphic novel somehow combined elements of myth, memoir, and realism to reflect on the complex dynamic of first generation Chinese students trying to fit into American society while retaining some part of their pasts. His newest compilation is a series of three short stories written in collaboration with artist Derek Kirk Kim (SAME DIFFERENCE AND OTHER STORIES). These stories, though related in some of the same themes as AMERICAN BORN CHINESE, mark a sharp change in direction.

The first story "Duncan's Kingdom" seems like a traditional sword and sorcery story in which the hapless knight, Duncan, attempts to win the hand of the Princess by killing the evil Frog King who has laid waste to the kingdom. Strangely, interspersed with the D&D-esque narrative are cryptic images of Snappy Cola bottles and brooding mother figures. The ending has a Twilight Zone tone that might cause eye rolling in older readers but could delight younger, less cynical ones.

The second story "Gran'Pa Greenbax and the Eternal Smile" is much different tonally. Frantic and surreal, "Greenbax" tells the story of an avaricious frog who is obsessed with money-making schemes. It's the kind of story where the main character gets big dollar signs etched onto his eyes while he screams "Ka-Ching!"

After exhausting the money making schemes available, Greenbax finds an eternal smile floating over the desert and plans to sell tickets to it. That plan doesn't work out so well and again a Twilght Zone ending switches around all of the reader's expectations. I found this story to be the weakest of the three, but that might be about my well-wrought bias against all things zany.

Finally, "Urgent Request" encompasses the largest tonal shift as the Yang tells the story of a downtrodden office worker who is buffeted both by her own crippling shyness and the petty mockery of her boss. When she receives an email from a Nigerian prince offering her riches and love if she could only send a few checks made out to cash his way, she acquiesces. As she sends more and more money into this obvious scam, her life takes a turn for the better. She skips around town and imagines herself to be a great and beloved queen. Yet again, a Twilight Zone ending is in store, but this one feels less clever-for-the-sake-of-being-clever and instead has a gentle, uplifting sensitivity. Maybe the ending is too pat, but the story skillfully causes us to care enough for the protagonist not to care too much.

All in all, THE ETERNAL SMILE is no AMERICAN BORN CHINESE, but it's a pleasant series of stories that students might find engaging and uplifting. After a graphic novel diet that includes the Hollocaust, Iranian oppression, and the Rwandan genocide, that could be a good and rare thing.


ART REVIEW
One interesTing aspect of the art is that each story employs a very different art style. "Duncan's Kingdom" is the most traditional style and takes advantage of the kinetic story to create vivid, colorful art. "Greenbax" is more cartoonish and frenetic – lots of gulps and spinning yellow stars.

"Urgent Request" shrinks the art into smaller boxes and uses washed out, gauzy colors to reflect the more introspective tone. For teachers, it naturally suggests a discussion about how art can be modified to fit the plot and tone of the story and, of course, what kinds of art would be most appropriate for other stories: THE GREAT GATSBY as anime or Marvel superhero; JANE EYRE as Alison Bechel or MAUS-ian animals.


TEACHING IDEAS
Each of the stories has some pretty obvious thematic content that could be tied into other novels typically done in English class. Also, the short-ish length of these pieces suggest the possibility of student works that attempt to model the Twilight Zone structure of this book.


MY RECOMMENDATION
Recommended for middle school and high school students with some cautions about cartoon violence (decapitations, frog choking, etc.).