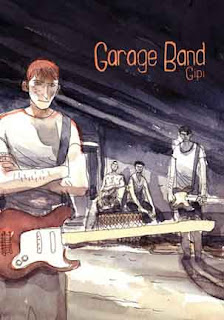 
STORY REVIEW
Every teenager with an electric guitar has a dream. Give that kid a space where they can plug in their amplifiers and crank it up loud, such as an empty garage, and you've given that budding musician something to strive for as an artist. But dreams are tricky things and reality is intrusive. The decisions one makes in life have ramifications. This mix of ideas is the basic premise of GARAGE BAND by Gipi. This graphic novel explores four teenage friends who want to make music and who are given access to an empty garage by one of the boys' fathers, with the understanding that it is theirs to use as long as they stay out of trouble.

Gipi develops these four characters carefully through the chapters, which are listed as songs (as if on a CD). There is the ambitious Stefano; the sullen Alberto; Giuliano, the narrator; and Alex, the drummer with an affinity for Hitler. They write and sing songs of themselves, capturing in music the father who has gone missing in a case of embezzlement, the brother and grandfather who have died, the turmoil of daily life in an environment that reeks of industrial dead-ends for everyone. There is tension on every page of this book – in the words and in the artwork.

And then it all falls apart in a moment, and all because of an amplifier.

The broken amp sets in motion a theft of musical equipment from a building inside a militarized zone of town, a missing wallet accidentally left behind when a pocket rips, and the resulting loss of the garage space (after the death metal band who have had their equipment stolen by the boys come looking for their stuff and confronts Guiliano's dad).

The lure of the corporate music world also raises its ugly head. One member of the music industry tells a character, "The market is all that matters. The music isn't important." Such words should be heresy to any young musician with a dream and yet Stefano – the de facto leader of the band – is clearly drawn to the offer to quit the band and work in the industry. It's the moral moment in the book and we only infer later, when the band finds an alternative place to practice purchased through embezzlement funds, that Stefano has probably turned down the offer in order to keep making music.

There are, however, loose ends here. Why does Alex revere the Nazis? What kind of music are they actually playing? (One can infer from the action shots at the end of each chapter that it is some high-energy rock the boys are dabbling in). And the relationships of fathers and sons teems just below the surface of a number of scenes, yet never feels very developed. There was more to harness there, but perhaps Gipi wanted to keep the story sparse and focused.

For high school students with an interest in music, this book hits home. For teenagers with controlling parents or families upended by death, this book may seem familiar ground. That is a good thing, as Gipi uses the concept of a rock and roll band to connect friendships, nurture a dream and cut through the insecurities of teenagers finding out some inner truths about life.


ART REVIEW
There is a washed-out look and feel to GARAGE BAND and this effect by Gipi seems appropriately matched to the story and setting, which is clearly an inner city in Europe (probably in Italy, where Gipi is from) that is in the midst of an economic downturn. The boys don't appear to have regular jobs and the landscape almost seems strewn with abandoned buildings. The use of watercolors spills outside the lines and a narrow pallet of colors works on this level quite effectively, raising the sense of anxiety and tension among the boys. Gipi evokes the sense that this dream of music may be the only real future for these boys.


RECOMMENDED
Recommended for high school students, particularly those with an interest in music. There is no inappropriate language.


FOR THE CLASSROOM
GARAGE BAND provides some interesting situations in which characters are forced to make decisions that have consequences and these moral quandaries might provide fodder for the high school classroom. For example, the boys decide to steal an amplifier and they justify the theft by declaring that it must belong to a church group. "The way I see it, their right to own musical instruments is zilch," notes the narrator. Later, one of the characters is confronted by his girlfriend for what he has done and he can't hide behind the moral ambiguity. He feels guilt. While many teenagers may not be faced with this particular situation, they are often unsure of what they are doing and why they are doing it, and the book may provide some interesting introspective writing, including the peer pressure that comes from a group mentality.

The inclusion of the Nazi posters and Alex's respect for Hitler would also provide for an insightful lesson on why it is people in the world still, to this day, see the world through this lens of hatred and race. Obviously, this would be a delicate discussion, but given in context of history, the issue of intolerance is an important one, particularly since some of the other members of the band don't believe Alex actually espouses the values of the Nazis, only an infatuation with the posters in his room.


OTHER INFORMATION
More information and an excerpt can be read at First Second.