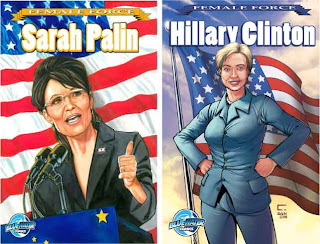 
Four weeks ago I began my research study on comic literature for my master’s thesis. I am working with a classroom of fifth graders, conducting a volunteer lunchtime comic book club to promote reading. After the pre-survey, I introduced the students to the various comics and graphic novels, giving them a synopsis of each of the titles.

I pulled out NEOTOPIA, a book about a strong princess who must take charge and lead her nation in the face of an invading army of nasty creatures.

“Ladies, if you want a book about a strong girl …” [loud gasp from the girls] “… who is the only one who can save her country, then this is it,” I said.

I relish the sound of children who are excited about reading and it delights me when I offer girls books that can speak to their femaleness; books that connect with their inner woman; books that promote strong, independent, intelligent females who can make a difference in the world around them. I love the sound of girl power, and I silently gasped with them.

And so you can understand why I gasped for the girls when I discovered a new comic biography series focusing on contemporary female trailblazers. FEMALE FORCE, by Bluewater Productions, is a bi-monthly, full color comic dedicated to preserving the stories of today’s influential women.

I asked Darren G. Davis, president of Bluewater Productions, why he started the series: “Because it's something people care about; its something with a historical value in a modern context, and because it's important to highlight strong female figures.”

It may have been true in the past that comics were geared for boys; however, that trend is changing rapidly with efforts such as FEMALE FORCE. As the genre gains legitimacy as a true form of literature, and as it increases in popularity, more and more books are being designed for wider audiences, including females and children. When creators and publishers take on the mission to create for the larger audience, the popularity and legitimacy, in turn, grows too. “My hope is that an honest and thoughtful portrayal of women of worth will drag in readers across the board, and if response is any indication, it's working,” said Davis.

The first book, due in January, is a biography about Sen. Hillary Clinton. The second book will feature Gov. Sarah Palin and is due out in February. From then on, the series will be bi-monthly. The stories will be collected every four issues and bound together.

Political figures are not the only subjects. While Davis will not reveal who will be the focus of the third book, he did say “the next one will be a television icon who has made a huge name for herself during the era when television was a male driven arena.” So far, the women will be modern females, mostly because those of yore have been covered extensively and Davis wants the series to be contemporary and immediately relevant.

Why comics? Davis has a reason – a story – and it’s one that you’ve heard before and will hear again. “I had a hard time reading as a kid and comic books helped me get over that. So I want to take these biographies and be able to have others learn from the non traditional book medium.” Those of us involved in comics have heard that story time and again from adult readers. Comics, it seems, was a significant and motivating factor in the life long reading habits of many a person, including Davis. Now his company is creating biographies of important women to inspire a new generation of readers. Update: Because of the election, Bluewater has adapted it's schedule for Female Force. The next biography to hit shelves, after Clinton and Palin, will be one on future First Lady Michelle Obama.