THE CARTOON HISTORY OF THE UNITED STATES 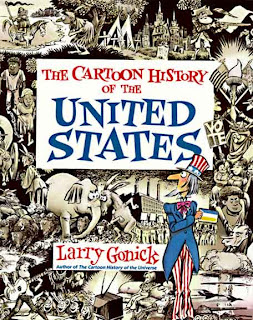 
REVIEW
Larry Gonick has done a lot for the subject of history, mostly by keeping the warts, the birthmarks, and the hate in the story. It’s not a pretty sight, really, what America has done at times, but it is history – our history – and Gonick brings it to life, boils it down, and gives us a good perspective on the real America from 1585 to 1991. He is quite good at presenting a 360-degree look at some of the controversial issues that have cropped up over the past few hundred years. We learn much about the society and the complexities that have shaped our current community.

Gonick is especially adept at two things: viewing history using different contexts, and inserting his sense of humor in the art and information. He pokes at our bumps and bruises and yet still gives the reader a balanced and humorous presentation.

Although it is only 400 pages, Gonick goes further and digs deep, giving us details that the average adult, let alone the average student, will have not heard of or recollect.


ART REVIEW
Gonick’s art style could be described, perhaps, as a melding of Calvin and Hobbes and School House Rock. More cartoon than comic, his artistic style is quite effective, giving us the nitty-gritty without bogging the reader down.

I don’t often recommend a book for ages younger than the publisher’s recommended age; however, Gonick’s CARTOON HISTORY OF THE UNITED STATES has more in line with interesting history than most textbooks and really nothing objectionable, except for history, which is often quite offensive and disgusting. Still, I think the publisher’s recommendation is too high.

I would not suggest buying every fifth grader a copy, but I do think a teacher could make use of certain aspects of the book even in elementary.


BE AWARE
If memory serves, there was a “Hell” or some other mostly innocuous curse somewhere in there, but other than that Gonick’s book is about history. Sure, it mentions sensitive subjects, but nothing that any good, red-blooded student of democracy should not know.


IN THE CLASSROOM
Not only is this book great for the high school history classroom, but also for that non-traditional student who needs to occupy his or her mind with an unconventional but factual education.


OTHER INFORMATION
Other books in the series include:

CHRIS’ RECOMMENDATION:
Highly Recommended
Schools need more historical books of interest to students. There is no reason that history must consist of lectures and memorizations of names and dates. The politics, the controversies, and the philosophical debates that have shaped our nation are significant and are interesting when given the right presentation such as Larry Gonick’s CARTOON HISTORY OF THE UNITED STATES.
Posted by admin at 12:47 PM