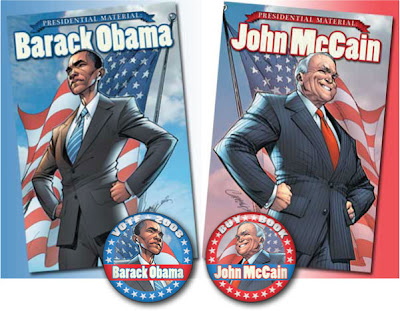 
REVIEW
Let’s get right to it: Are the biographical comics about the presidential hopefuls – John McCain and Barack Obama – biased, slanted, or skewed? Are they nothing more than political propaganda, glorified stump speeches, glossy-paged propaganda? Are the comics aimed at disparaging one contender over the other?

I am not sure there is a simple answer to those questions except to say that both comics treat the candidates with respect, while refraining from being nothing more than paid political advertisement. The historical warts and wrong doings of both candidates are addressed, as are their messages. Are they addressed equally? I suspect that one’s previous experiences and current political leanings may greatly affect the answer. I believe, for the most part, both comics are factual and fair; however, I also maintain that each book is its own title, independent of the other. Perhaps we need not compare them with one another, but compare each title to the candidate’s background. With such diverse candidates histories the stories are bound to be different, but does that not mean they cannot be fair? Again, that may very well depend on one’s perspective. That’s okay.

TGC Staff Writer, Kevin, makes an interesting point when he compares and contrasts the artwork. Obama’s art is more vibrant, colorful and less detailed, while McCain’s illustrations are muted and more detailed. Is this a bias or simply artistic style? Should the publisher insist that there is more continuity between the two works? If so, would that visual continuity ensure more fairness? I refer you back to my earlier refrain: That may depend on one’s perspective. I’m not sure I have an answer yet. I think there are valid arguments on both sides. The coloring on both books was done by the same person.

The fifth grade students in my comic book club were very excited about reading these comics. However, the massive amounts of text and difficult vocabulary reverted most of them to picture walks. The reading level was too high for most of them, something that Kevin also noticed. Like him, I made them available. These are probably best suited for more mature readers with a larger vocabulary and more practice with text.


OTHER INFORMATION:
The comics are available individually for $3.99 each. A flip-book featuring both stories, each with it’s own cover, is also available for $7.99.


MY RECOMMENDATION:
Highly Recommended
All in all, the presidential comics are a good piece of biographic information about both candidates. When considered independently, they are fair. But as Kevin pointed out, when compared and contrasted with one another, the answer might change. Without a doubt, these types of biographic comics are important in the classroom.

I should have also updated and said that this comic has been flying out of my classroom with sixth graders, too. I actually had a short waiting list for it. That says something about their interest and the ability of comics to connect with them.
Kevin