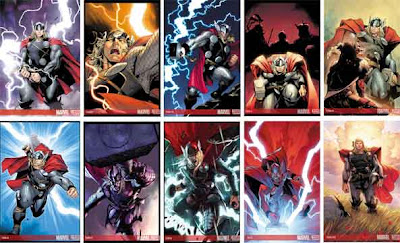 
STORY SYNOPSIS
Thor, god of Thunder and son of Odin, was dead along with all the other gods of Asgard. His earthly persona known as Dr. Donald Blake helps to bring Thor back to the realm of the living. Thor recreates Asgard and seeks to bring his brethren back to life and return Asgard to its former glory as home of the gods.

He finds land in Texas and reestablishes the grand kingdom, which piques the interested of Iron Man and the rest of The Avengers. Of course, there is history between them – bad blood caused by CIVIL WAR – but a political compromise is forged, at least for now.

With renewal comes millennia-old baggage: deceitful and jealous gods, frost giants, and much more. Once again the Asgardians must fight foes from within and without and set the world right.


REVIEW
THOR is an outstanding blend of Norse mythology and Marvel universe – a concoction of legend and spandex, caped, armed and ready to battle the external forces of evil and the destructive manipulation of internal politics. Superheroes may not be real, but the situations they endure, albeit allegorical at times, are authentic. Thor’s sibling, Loki, is the perfect example of one who seeks the deception and destruction of one’s own kind, and yet is a necessary part of life.

From that perspective, THOR is indispensable literature for the student preparing him or herself for the hardships of life. Choices must be made and the consequences, no matter how destructive, must be accepted.

ART REVIEW
THOR is beautiful in its presentation of friend and foe, foreground and background, details, composition and layering.

The book is not inappropriate for most middle school kids, but the comic is not necessarily intended for children. The ladies can be more scantily clad and sexual themes are suggested.


BE AWARE
Magic, gods and goddesses, and strong fighting scenes with blood splatters are frequent. There are sexual themes, too.


IN THE CLASSROOM
For the reasons stated above, this comic has a specific impact on teens that is apropos to their lives. High school is full of politics, intrigue, switchbacks, backstabbing, plots, alliances, severed friendships, disappointment and double crosses and so is THOR. Real life comes alive in this superhero tale.


OTHER INFORMATION
A movie tie-in is scheduled for release in July 16, 2010 and will be directed by Kenneth Branagh.


CHRIS’ RECOMMENDATION:
Recommended
I do not recommend the book to just any high school classroom. It should have a purpose, a goal, in order for THOR to be appropriate, but THOR has its place for the right students in the right classroom. The story is great and the opportunity for a lengthy backstory (especially with CIVIL WAR) is available.