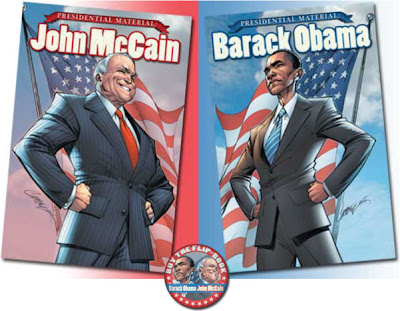 
REVIEW
(Disclaimer: Let me just say that while I often lean left in my political views, I am pretty much a centrist and independent voter.)

It is commendable that IDW Publishing has created these two comic biographies of the United States presidential candidates. Although published as two separate comics, I picked up the flip-book version that has Republican John McCain on one side and Democrat Barack Obama on the other. I read both of the comics in one sitting and found them to be very interesting on a number of levels. The text is pretty dense, and I wish they had found some ways to edit down the stories a bit, particularly as we think about ways to have younger children access more information about the candidates. I can only assume that the real target audience here is adults, which makes sense when you consider the voting age requirements.

As a former newspaper reporter, I also tried to read the comics through a lens of critical media. What I mean is: Did the comic book biographies seem slanted in any way or were they politically neutral? There will surely be some other readers who take issue with my assessment, but it appeared to me that the McCain comic dwelled much more on negative aspects of his career (mistakes he made when it came to campaign contributions) and personal life (not knowing his wife was becoming addicted to painkillers) than the Obama comic, which seemed to use more dialogue and storytelling right from Obama's book, Audacity of Hope. While McCain eventually emerges as someone who has paid attention to his mistakes and learned from them, the negative shadow seems already cast. And the writing seems to contain verbal jabs here and there against McCain. In the Obama comic, in contrast, the only negatives that emerge are his associations with controversial figures from the Chicago political grounds (such as Rev. Wright, former Weather Underground bomber William Ayers and developer Tony Rezko).

On the positive side, the issue of "character" does emerge from both of these comics in a way that newspaper profiles and magazine articles often hint at, but don't always seem to address. The comic genre gives life to the world around these powerful men during key moments in their lives. We see McCain as a prisoner of war, grappling with ethical issues in the face of severe punishment. We watch Obama being laughed at by students when they hear his name being called out by the teacher, who further embarrasses him by asking what African tribe his father belongs to. In considering ways that voters can access information about the candidates, these comics serve a useful purpose and combined with other media, I hope people can make an educated and thoughtful decision about the person who will lead our country into the future in the midst of war and economic turmoil.


ART REVIEW
The artwork here seems varied. At times, the images are vibrant and alive. But in some frames, there is a washed out, photocopied feel to it. And, to continue my political criticism from above, the washed-out illustrations are mostly in the McCain comic. Now, I acknowledge that there are different illustrators for each comic biography, so it is natural to assume that the art won't exactly mesh. But I would argue that, in considering the level of political fairness that must be balanced with this kind of project, particularly being published in the last month of a presidential campaign, perhaps they should have had the same illustrators working on both comics. Or am I just too critical?


FOR THE CLASSROOM
I had hoped to use these comics with my sixth graders, but it is clear that the writing is more geared towards older readers. Which is not to say that I have not kept the comics available in my classroom. I have. For older readers, though, I think the comics provide an interesting potential for comparing and contrasting the candidates on a variety of issues. Also, students could use the comic as an analysis of multiple media (comic, magazine, radio interviews, television, etc.) and examine the use of those media in a political campaign.


MY RECOMMENDATION
I would highly recommend this for high school students. There are some moments in the McCain comic where he is being tortured that might make some teachers a bit sqeamish, but there is nothing there that is not talked about or discussed on the evening news.