YU THE GREAT: CONQUERING THE FLOOD 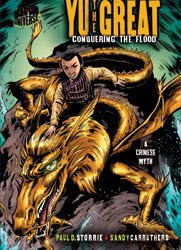 
STORY SYNOPSIS
From the back cover: “The great Emperor Shun has called Yu before the Dragon Throne. All of China is beset by terrible floods. Homes, farms and villages are being washed away, and Shun believes Yu is the only one to save the land and the people. Yu vows to end the floods, but first he must face the angry Yellow Emperor – the ruler of the gods – and Yu’s own grandfather. Will the Yellow Emperor help Yu or set a trap for him? And how will Yu ever stop the floods?”

YU THE GREAT is a fabulous tale of family loyalty, honor and duty. Yu was an honorable hero, unlike his father, whose selfless acts saved all of China from the deadly flooding. But the personal costs were high, indeed.

The research and clarity of the story makes for a great read and the art really accentuates the story and punches the many emotions of Yu.


IN THE CLASSROOM
When completing a practicum experience with a fifth grade class, I noticed right away a high interest genre with many of the boys: mythology and legend. This group of kids routinely checked out books on mythology from the library. They simply could not get enough. I brought in the three titles I had (HERCULES, YU THE GREAT and BEOWULF) and they loved them, seeking out more titles from the library.

Those are, of course, the experiences we wish to offer our students. Self-discovery – inquiry – drives authentic and long-term educational experiences. With these graphic novels, a powerful unit on myth and legend could be designed.

A compatriot of mine, Paul Epps recently wrote a lesson plan comparing and contrasting myth with science – discussing the roles that each play within society and the questions both try to answer. Paul used HERCULES in that lesson plan, which will be published later this year, but other myths and legends would be just as applicable, especially if students are charged with creating their own myths in order to explain a natural phenomenon.

These myths and legends are also a great way to student other places, countries, and societies, and help them related to students of different nationalities. Understanding the subtle differences in culture and imagery make for a more hospitable community. Dragons in Western society conjure up images of destruction, as dragons are seen as hostile. Dragon imagery in Chinese culture is much more benevolent and symbiotic.

YU THE GREAT offers many learning opportunities in the classroom.


Other titles in the Myth and Legend series include these Greek, English, Chinese, African, Norse, Arabian, Egyptian, and Japanese tales:
MY RECOMMENDATION:
Highly Recommended
This is excellent mythology aimed at a particular age group: tweens and early teens.