ZEUS: KING OF THE GODS 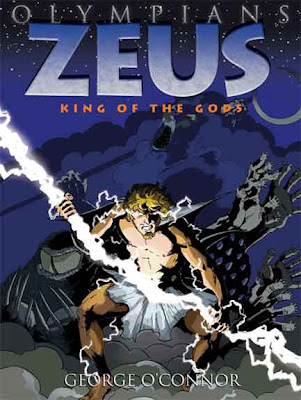 ZEUS: KING OF THE GODS is the story of how the universe came to be according to Greek mythology. It all started with Gaea or Mother Earth. She was lonely and desired a companion so she created Ouranos (the sky) and thus time began. The two conceived children, many children in fact, the first of which were the 12 Titans, eternal and beautiful. There were others: the three Cyclops and the three Hekatonchieres.

Ouranos was jealous and he imprisoned the Cyclops and the Hekatonchieres into Tartarus, which angered their great mother, Gaea, and so she got her Titan son, Kronos, to attack her sky husband with a sickle of adamantine. Kronos then sat on his mountain throne as the lord of the universe.

Kronos and his Titan sister, Rhea, bore children. Just like his father, Kronos was also concerned about the power of others so he ate his immortal children. Thanks to the quick thinking of Rhea, a switch was made with the last of the children, saving baby Zeus from the fate of his brothers and sisters, allowing the rest of the story to unfold.

ZEUS is the story of the universe and the war between Kronos and his children leading to Zeus’s eventual seat as king of the gods.

The time before Zeus is a lesser-known aspect of Greek mythology than, say, the stories of the gods meddling in the business of humankind. With that said, the stories are no less exciting.

I found ZEUS, the first book in the OLYMPIANS series by First Second, to be incredibly electrifying. The constant barrage of deceit, attacks, sons usurping fathers, wives tricking husbands, and the fact that the being at the center of the universe is female, made the story gripping and had me asking questions, a device O’Connor used purposefully.

Why is Metis, Zeus’ girlfriend, never mentioned after page 48? What happened to Kronos’ sickle, which used to destroy his own father? It inexplicably disappears on page 61. These elements are not mistakes. O’Connor was smart in his knowledge that more questions leads to further investigation. Perhaps the answers will show up in subsequent titles? Either way, the effect works well giving the reader something to ponder and something to look forward to in future installments.

The OLYMPIANS is a hit series for First Second and O’Connor. The connection between these myths and modern super heroes burns from the page and they will, no doubt, excite students of all ages.

“Oh, now that’s cool,” I said to myself when I took ZEUS out of its envelope and gazed at the cover. The midnight blues; the stars and smoke; and the ominous creatures set the backdrop for the ever-powerful, angry, brooding, golden-headed, lightning encircled Zeus with ripped pecs. In his grasp and his eyes is foil-blasted electricity cracking across the void. War is obviously afoot and O’Connor’s cover makes it impossible not to flip through the pages.

The Titans are mostly enigmatic creatures: mountainous, naked, shadowed. Only their shapes are illustrated. In most cases, even their eyes are hidden from the reader, with the exception of Kronos, in whose eye sockets lives the infinite universe.

You may have noticed I used the term “naked”. Much of Greek art depicts the natural human form, naked and beautiful. Culturally, it is appropriate to show the human body in a Greek text. O’Connor takes great care to conceal the breasts and genitals either using shadows or nature. Zeus, himself, is shirtless on top and covered in a loincloth below.

There are only two issues that might cause concern for the elementary teacher, but no so much for the middle school instructor. There is only one word of profanity and it is on page 31: “Prophecy be damned. We will … I will … not be beaten by brats like you.” Pretty innocuous language, really.
The nakedness of the characters will likely cause the most concern. While nothing is gratuitous, and it appears that O’Connor considered the issue, some of the characters are without clothing, although they are always tactfully hidden in shadows or by nature.

IN THE CLASSROOM
George O’Connor’s title starts out hot on the academic tracks with an Olympian family tree graphic. I love maps, charts, and graphs and we teach our students to develop their own graphic organizers. The inclusion of the family tree makes perfect sense for a book marketed to kids. An interactive version of this family tree is available here. 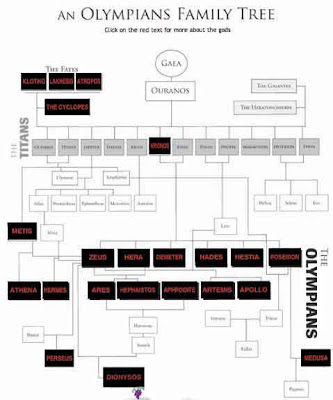 He goes on to include some informational pages on key players (Zeus, the Cyclopes, Metis, and Kronos), discussion questions, as well as an annotated notes section giving more details, explanations, clues, and questions regarding specific pages and panels. O’Connor also included a bibliography and recommended readings. All of these are excellent additions for any book in the classroom. I do wish, however, they would have included a pronunciation guide to help students with the unfamiliar names. Perhaps they will do so in future installments. I use this pronunciation guide with my students.

The circular nature of life – the repetitive mistakes made from generation to generation – is brutally apparent giving the teacher a chance to talk about history and of ending the cyclical mistakes we make, be it in our individual family unit or as a country.
The numbers three and 12 are present in the myth, giving rise to the literary and cultural connections to those significant numbers.


Teachers would be well advised to drop the hammer on Greek mythology this Spring. I say this because of the influx of Greek myth-related movies and books. PERCY JACKSON AND THE OLYMPIANS has been a popular traditional book series and movie for kids. The new CLASH OF THE TITANS movie, about Perseus and Medusa, is playing now. Both will renew the interest in mythology with students.
The official OLYMPIANS website has a lot of details. They offer a section for teachers, which includes a teachers guide (pdf) and reading group guides (pdf).
OTHER INFORMATION
Other titles in the series include: ATHENA, HADES and HERA. Keep an eye out for those. Click here for the official Olympians home page.


CHRIS’ RECOMMENDATION:
Highly Recommended
Posted by Mr. Wilson at 11:17 AM