KICK-ASS: CELEBATORY NERDGASM FOR THE MASSESS 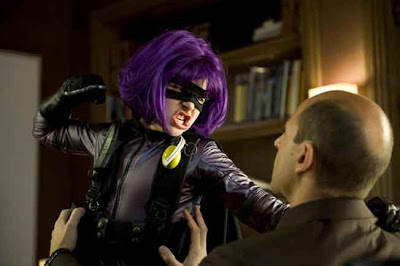 
YOU HAVE BEEN WARNED
Okay, boys and girls, it’s time to rock the mature, fanboy side of comics – and to celebrate the adult form. I make no apologies for my review, my language, or my excitement, but bear in mind, I’m talking comics and movies and not K-12 education. There is nothing about this comic, movie (or review for that matter) that is for kids, and I cannot imagine any of it appropriate for any K-12 classroom. This is full of intensely profane, saucy, smutty, scandalous, vulgar, violent, comic-movie geekdom. Proceed with full consent, a utility belt full of anticipation, and a good sense of humor.


ASS-KICKERY AT ITS BEST
Back in January I saw my first trailer for KICK-ASS and I nearly came undone thinking this would be the ultimate kinda-naughty-but-probably-okay-for-my-daughter super hero movie. I missed the comic unveiling. “Sure, there is that butt word in the title, but that’s probably the worst of it,” thought I. Then I saw the R-rated trailer. Sweet Judas Priest! When I saw the 11-year-old Hit Girl call her soon-to-be adult victims “cunts” then proceed to hack-and-slash them like a human vegematic, I rethought this movie as more appropriate for a guys night out with my crew, my peeps, my boys. Truth be told, I was even more excited to see a movie that had the testicular fortitude to take on such a bold approach. I was all in. 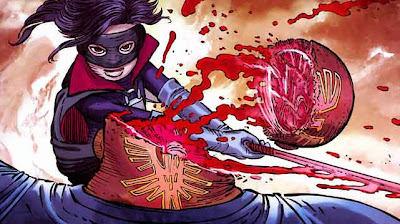 Speaking of the gonads, KICK-ASS has two of them – big old puppies made of cast iron that hang low and swing wide. The whole kit and caboodle of the KICK-ASS franchise is a mincemeat cobbler of AMERICAN PIE, THE BOYS, and KILL BILL. The adolescent humor in AMERICAN PIE is more prevalent in the movie version than the comic, but only slightly. Both are as irreverent and shocking as THE BOYS comic from Dynamite and the violence, pop culture references and use of music are reminiscent of Quentin Tarantino’s movies (KILL BILL and PULP FICTION) – channeling the ability to make you laugh at the most horrific and grotesque of scenes add to the disturbing and entertaining nature of the movie. If that’s a bad thing, then I’m a bad boy because I don’t care.

The comic-movie conglomerate works for several reasons, but the most important element is that the comic-turned-movie is not entrenched with an established mythos. Free of the dogma that constrains so many comic-related movies, KICK-ASS is able to have a book and movie that are both enjoyable, but individual at the same time, giving the director some leeway in adapting the comic for the silver screen.

KICK-ASS takes itself seriously as a comic art form, but it is not stupid slapstick, snobbish literature, or an elitist art house film. The source material and the film understand the complexities and sometimes-ridiculous nature of superheroes and weave the campy nature into a perfectly rendered art form. It is everything a fanboy loves, needs and wants.

The movie takes the camp a step further by using the actors to balance the serious and the absurd in a yin-yang of taut yarn. The acting performances of Big Daddy (Nicholas Cage) and Hit Girl (Chloe Moretz) were exceptionally good. Big Daddy was a superb 60s Batman spoof and Hit Girl was the epitome of girl power: trained comic book assassin with childlike perspectives. She cares nothing for dollies, but does carry a Hello Kitty backpack in the comic. 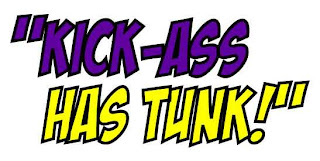 A PURPOSEFUL APPROACH ON MY PART
I have been disappointed before when I read comics or novels and then watched a movie adaptation. I did not run out and buy the KICK-ASS comic even when I found it on sale at a local comicon. I knew I would not be able to resist and would read it first.

Instead, I choose to employ my long-held hypothesis that movie adaptations of comics or books are significantly less irritating (hence more enjoyable) if I read the title after the movie. My thinking is that I will be able to interweave both into my schema as cohesive but individual art forms, allowing me to enjoy both.


I saw the movie last night, then downloaded all eight comics to my iPad and read them this morning. Good luck finding copies of the trade paper and forget about first printings of the eight issues.

I loved the movie and the comic. Loved them. Is that because of my purposeful approach, the dogma-free storyline, or the closeness of the movie to the vision of the source material? I cannot really say without testing my hypothesis further. I will simply tell you I am in love with both.


THE TEACHER IN ME CANNOT HELP BUT COMPARE AND CONTRAST
Despite my movie-first-then-read hypothesis, I am compelled to compare and contrast both forms and approaches. After all, the comic is the source material and the movie is simply an adaptation.

As with any movie adaptation, the screenwriters integrated several scenes from the book into one movie element. I guess that’s okay. It worked. Conglomerations are typical and were not significant issues for me. The way some characters interacted was very different. All of the costumes, except Kick-Ass’, were changed significantly. Big Daddy was a scruffy, biker type in the comic, but more of a poindexter in the movie. Interestingly, the geeky movie version of Big Daddy seemed a better hand-to-hand combatant.

The climactic ending was changed. The characters’ impetus for coming together was vastly different, but the ultimate violence and feeling were the same. In the comic, Big Daddy had a secret, secret origin unbeknownst even to Hit Girl, an element that was scrubbed from the movie adaptation. There are other changes, but they are mostly minor. 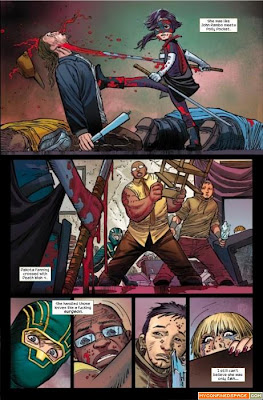 AH YEAH, TITANS
KICK-ASS is a nerdgasm of awesomeness, one that celebrates all things superhero and takes the adult comic genre into new savage and smutty levels. I can sum it all up in three words: KICK-ASS has tunk! Damn straight.
Posted by Mr. Wilson at 10:14 AM