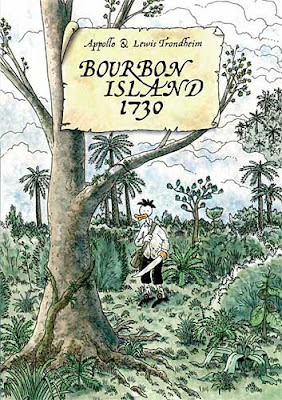 STORY SYNOPSIS
From the website: “It is 1730 when Raphael Pommeroy arrives in the West Indies with his ornithology professor. They’re supposed to be in search of the almost-extinct dodo … but Raphael is quickly entranced with the piratical inhabitants of the island, becoming obsessed with their vision of a world where all people are free and equal, regardless of their skin color. Drama unfolds on Bourbon Island as all the inhabitants race to find the treasure secretly cached on their island – and reveal their inner selves in doing so."


REVIEW
BOURBON ISLAND 1730 is not an action-adventure thrill ride with swashbuckling pirates running their enemies through at every turn. It is a subdued historical drama full of tumultuous underpinnings that communicates important intricacies in human governance then and now.

That is not to say that BOURBON ISLAND is a staid comic. It is rambunctious and full of dissent and discontent – a wonderfulct concoction for the angst-filled adolescent. The characters, illustrated as animals, were richly conceived and executed, giving the reader plenty to digest.

I found myself reminiscing about my first experience (high school) reading Mark Twain’s HUCKLEBERRY FINN. I drew parallels to the ways that Twain used his characters to talk to us about our own attitudes and beliefs and the way that humans devalue other humans.

One will notice, right off, the extensive use of the word “Negro” throughout the story. Indeed, the island is full of aristocrats, pirates-turned-plantation owners, slaves, run-away slaves, pardoned pirates living off the land, and slave hunters.

The hobble-gobbled mixture of peoples makes for competing ideals and subversive attempts to change the world. All the while, a group of ornithologists make their way through the jungle to find the elusive dodo bird.

BOURBON ISLAND is exceptional and I wish I had an adult book club to talk with about it. I could not get enough of the ISLAND and was disappointed when it ended.

BOURBON ISLAND would be lost on younger students. I think many high schoolers will need assistance in making the most out of the book and connecting it to American history and contemporary culture. For those who attempt it, I think the discussion and learning could be outstanding.


BE AWARE
The f-bomb is launched, although it is done so appropriately for the subject, time and characters. Other minor curse words also appear. I mean, really. Many of the inhabitants are pirates, French plantation owners, slaves, slave hunters and heavy drinkers.


IN THE CLASSROOM
I highly recommended two techniques when using BOURBON ISLAND 1730 in the classroom: twin texts, and a pre- and post-test.

Historical context is everything when looking at period piece, especially when it involves policies and politics. To grasp the graphic novel, one must first access some prior knowledge and have a foundation – a context – in which to place the story.

I would consider a pre- and post-test to help guide the learning. The words and concepts could include: ornithology, colonialism, slavery, geography (Bourbon Island, Madagascar, West Indies), real life pirates, America’s underground railroad, and politics. By the way, I would use my interactive white board (SmartBoard or Prometheus) and use Google Maps or Google Earth to explore the geography and typography of the West Indies.

After the pre-test but before the students read a single page I would ask the students to think about what ornithology is, but don’t let them discuss it … yet. Then direct them to specific vocabulary words in the first chapter (titled “The Birds”): waterfowl, specimens, albatrosses, diomedea melanophris genus, dodo, expedition, and ornithology (pg 40). Have students pay special attention to the backdrop of the panels. What, besides the characters, is illustrated? Anything drawn more than others? Why? Why is Mr. Despentes traveling to Bourbon Island?

The purpose is to get students to look at comic literature beyond the words, but to see the text and images as a singular unit. In other words, I would ask the students to read the words and art and parse the definition of ornithology without looking it up on the Internet or in the dictionary. They should use semantic and syntactic cues derived from both the text and art and be able to cite specific passages.

This same approach could be used throughout the graphic novel to help students gain a deep understanding of the story being told.

CHRIS’ RECOMMENDATION:
Highly Recommended
Posted by Mr. Wilson at 10:42 AM