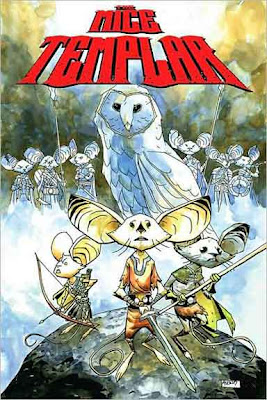 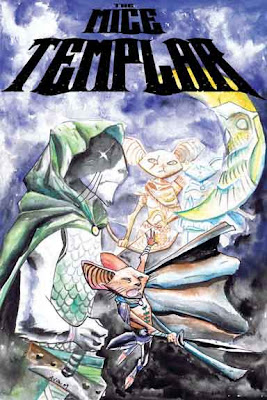 Long ago the god Wotan chose the warrior-priest Kuhl-En to bring truth and harmony to the Dark Lands. There he stood on the threshold of evil, alone. His hope inspired many to take up his cause, eventually leading to the creation of the Templar, a loyal brotherhood of protectors of the natural balance between light and dark.

As the fields of wheat grew, died and grew again, the story of Kuhl-En became legend then myth. Many Templar, known as the Revisionists, grew to see the story of Kuhl-En as a tale of good rather than the actual truth from god Wotan, as the traditionalists saw it. The two factions fought for control of the Templar leading them to a misguided strike and a civil war. Few on either side lived and those that did scattered, some retreating back into society while others trained new recruits. The leader that won took his control and turned it into tyranny.

THE MICE TEMPLAR is the story of Karic, a boy who is believed by some to be a new prophet from Wotan, one who will set the order right again and send the dictator and his rats and weasels back to their rightful place.

THE MICE TEMPLAR is an intoxicating saga of competing ideologies. It is a story of power, or rather the struggle to supplant those in (and on the other side the attempt to maintain) power – and this entire endeavor in the name of their god Wotan.

Boiled down, TEMPLAR is about usurping a tyrannical leader who is holding the world of mice hostage, destroying their lands and imprisoning their people. The religious subtext is strong and captivating, aligning well with the religious warmongering in our world. The traditionalists and revisionists still hold grudges toward one another’s beliefs, and the priests living in the Great Ash Tree, who spoke on Wotan’s behalf and dispensed his wisdom, also became corrupt from their own desires for control.

How will young Karic the chosen one (if he is indeed chosen) reunite the people who have been so hurt and pained by one another? How can he glue together such deep fractures? He is on his own journey, the hero’s journey, to meet his destiny.

In the beginning, the yarn feels almost formulaic, but as the narrative unfolds, Glass – being keen on creating something fresh and interesting – takes unexpected avenues from the typical hero story. The first surprise being the fact that Karic’s sage guide is a deceiver, and luckily for Karic the guide is discovered, thwarted and replaced.

Glass develops a strong balance between character development and action, giving the story a brisk pace without rushing the tale for the sake of swordplay. Like any good fantasy story, there is plenty of blood-spurting action: decapitations, impalings, amputations, eye-gougings, and digit loss.

The number of characters grows significantly throughout the two volumes, which requires careful reading to prevent confusion. I do not, however, consider that a fault, but it can be problematic to illustrate so many distinct mice with large ears and still keep them discernable to the reader. Glass inserts enough descriptive dialogue and narrative labels to help the reader differentiate.

I simply could not put THE MICE TEMPLAR down. I read it while working out in the mornings, in place of television at night, and on the weekends. I took my time and absorbed the art and story, reread pages, and enjoyed every second of the experience.

There is no profanity or nudity. There is a lot of fantasy violence, very bloody violence in fact, that makes the book best for teens. With that stated, I have fourth grade students who I know would be actively engaged in this story, but whose parents might object because of the violence. I would only provide it to elementary students with parental permission.

BE AWARE
There is extensive fantasy sword violence with blood and death.

I work with one student who requires stronger material to keep his attention. When presented with comics and novels meant for teens, he reads with a passion and fervor unseen in other students. He devours books in lieu of video games and television, then comes back begging for more. With parental permission, I will check out THE MICE TEMPLAR to him knowing full well he will be at door the very next morning, 30 minutes before school starts, begging to talk about the story.

THE MICE TEMPLAR is ripe with modern day connections to religion and war, giving rise to study in many different classes.


How is TEMPLAR similar to the American Civil War? How does our ideology affect our relationships with friends, family, and strangers? How does religion play a part in war? What leads brothers and sisters to kill one another over a belief system? Can people of diametrically opposing viewpoints live in harmony? How have religious beliefs influenced wars past or present?

I envision high school English and social studies teachers collaborating on a unit using THE MICE TEMPLAR. The literature teacher talks about the themes, the monomyth, and the narrative while the social studies teacher uses the TEMPLAR to connect with previous and current wars, social impact of religion, and the installation of hope on an oppressed people. Of course, there would be plenty of cross-over, but I think it could make for a robust and influential unit. Discussions could carry over into both classes and teachers could each take a figurative side exposing the students to different viewpoints, making them think through the complex implications of our decisions and actions.

CHRIS’ RECOMMENDATION:
Highly Recommended
Posted by Mr. Wilson at 11:52 AM