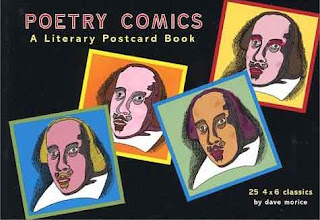 REVIEW
I was lucky enough to stumble on Dave Morice’s POETRY COMICS: A LITERARY POSTCARD BOOK at half-price from the Teachers & Writers booth at GIE-Con, something Chris W. and I hadn’t actually seen until then, although word-art of course exists in x-number of media and “poetry comics” has been thrown around a little recently. Honestly, conditioned as a literature elitist, I was awfully skeptical, especially because a Warhol-like Shakespeare graces the front cover and – okay, I know it’s sacrilegious, but—I am way sick of the bard, at least as the patron-saint of Western literature.

Even though I gather the postcard book exists as a promotional toward Morice’s POETRY COMICS: AN ANIMATED ANTHOLOGY (I’d love a review copy, T&W! Hint, hint!), I am really taken by its novelty as a stand-alone. We are spared Billy Shakes but for two cards, both made highly entertaining as bizarre Where-the-Wild-Things-Are-like cartooning, and followed by a Robert Herrick turned 1930s film noir, a superhero RAVEN (whose only words—“NEVERMORE!” — inspire fear in the hearts of criminals!), and the best use of an Emily Dickinson quote I’ve seen.

I have to admit that it ruffled my tail feathers to see Shakespeare, Poe, Dickinson, Coleridge and the like anthologized again. I get that they are popular and pioneering figures in canon, but – excepting Emily – their novelty is worn for me. (I had to suffer this stuff for several years straight, so it’s a lot like eating too much chocolate ice-cream.) However, T&W and Morice have figured out this wonderful way of making dated poetry fresh and fun. Then, of course, they throw in a couple modernists and beat poets, and the cartooning gets real weird.


AGE RECOMMENDATION
My Rating: All Ages
While you are dealing with occasionally risque subtext, Dave Morice – well, okay, he’s not that tasteful – there is a little cuddling and innuendo, but patterned on plain 30s comic-detail, there is little risk of offense. The reality is that POETRY COMICS: A LITERARY POSTCARD BOOK is an engaging twist on stuffy anthologies, and I suspect potentially a wonderful means of inspiring interest in canon poetry.


MICHAEL’S RECOMMENDATION
Highly Recommended
This book is, frankly, just a lot of fun.