THE EDUCATION OF HOPEY GLASS: A REVIEW FROM A UTEP GRADUATE STUDENT 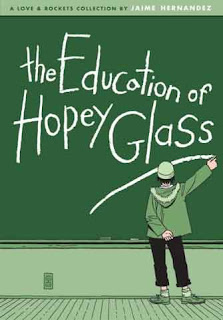 In THE EDUCATION OF HOPEY GLASS, Jaime Hernandez attempts to portray the lives of several Hispanic adults, paying close attention to the development of Hopey as a young woman trying to make sense out her life as she takes a teaching assistant position at an elementary school. Interestingly, the graphic novel seems to come to an abrupt break midway through, and turns it’s focus away from Hopey, her lesbian lover Maggie, and her new career as a teaching assistant; to that of a highly sexually charged relationship between the characters of Ray and Viv, and Ray’s unrequited love for Maggie. It is not clear if Hernandez intended the graphic novel to read this way, or if it is a major flaw in the plot line.

Hernandez explores issues of racial identity, racial discrimination, sexual and physical violence towards women, and homosexuality as prominent themes and underlying themes in almost every vignette of his work. He artfully combines the characters choice dialogue with highly explicit illustrations that not only set the scene for the reader, but provide background information as well. His illustrations are done with so much expertise and craft that many times dialogue is sparse or non-existent, and the story line does not seem to suffer. However, it may be this expertise that is Hernandez’s undoing as well.

I suggest that in the second half of The Education of Hopey Glass, Hernandez may lose some of the reader’s interest because of the explicit sexual relationship between Ray, Viv, and Angel. While more mature readers may be turned off by the explicit sketches, some younger readers may be turned on. Either way, the focus on the explicit sexual images may overtake a readers attention, rather than focusing on the plot line and racial themes apparent in the graphic novel.

A suggestion for a lesson plan can be geared towards twelfth-grade and college level students exploring the theme of racial identity and/or the “passing” theme. In the text, Milena Loznika passes for a young Mexican woman to land a job on television. Teaching suggestions include linking THE EDUCATION OF HOPEY GLASS with Nella Larsen’s Passing, and W.E. Bois’ The Veil. One can ask students to read all three texts, hold a class discussion, and then give students a choice of writing a comparative/contrast paper or to compose their own prose or poetry, citing their own experience of passing if applicable.

So, in regards to the classroom, this one is probably NOT appropriate due to the sexual nature? Thanks for making that clear because I know teachers come here, searching for ideas for the class library or the school library, and that is important to consider.
Thanks
Kevin