DEOGRATIAS – A TALE OF RUWANDA: A REVIEW FROM A UTEP GRADUATE STUDENT 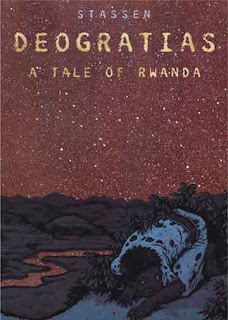 DEOGRATIAS is a graphic novel of a minimal length but one which might need to be read twice and with an ample amount of supplementary contextual information. And even then, engaging the truth becomes a meticulous process of revelation, not through direct statement of fact but through innuendo, suggestion and second hand accounts (at least at first). Furthermore, the confession of the ultimate crimes remains vague and information regarding the degree of complicity is absent. The translator, Alexis Siegel, incorporates several pages of contextual information that is perhaps intended as an anticipatory element that will help the reader absorb the narrative. Still, I found myself completely unprepared to mentally deal with the adumbrations regarding the subjects of genocide and cannibalism.

The novel unveils parallel realities of existence in which the pedestrian world of logic and cause and effect compete with the sublime reality of physical addiction and insanity. The story discloses the life of one young boy, possibly orphaned and living somewhere between the streets, the Christian missions, the brothels and the mercenary recruiters. His life becomes a daily struggle with alcoholism, drug addiction and later insanity. He suffers from delusions that he has become a dog who eats dead bodies due to the guilt he feels over treacherous acts of torture, rape, murder and possibly cannibalism he has committed against people he knew as childhood friends. The overarching cause of the atrocities might be attributed to the ethnic struggles between the Tutsi and the Hutu tribes of Rwanda and yet this explanation seems grossly inadequate.

I was left wondering how a young, innocent boy evolved into a torturous, murdering cannibal and the most dangerous kind of sociopath. And yet he is not completely a sociopath. His journey into insanity in the wake of his deeds is evidence of his moral struggle. The novel could be extended and developed into a study on how life on the streets serves to neutralize feelings of human empathy and personal conscience. Was it the physiological changes due to drugs and alcohol or the psychological impact of a life devoid of solid social bonding? If there is a moral to the story, it is implied in the life of this young boy, who is subject to a substantial discourse of contingencies and who has never known boundaries or rules of any kind. Even the missionary priest who is supposed to teach morality is rendered inept to the task as his widely known affair and love child with one of the town’s prostitutes has extinguished his credibility (Strassen, p.12).

And on another level, the purpose of the Christian missionary presence is called into question. The moral message fails to transform the society possibly due to the lack of a good example. In addition, the priests and the religious workers appear to assume a “laissez faire” attitude regarding the horrors being committed by the Hutu against the Tutsi. The tone conveyed appears to be one that is essentialist in nature (attributing individual acts as evidence of ubiquitous characteristics that are rooted in genetics or cultural norms) and one that dismisses the barbaric acts as somehow a foregone conclusion and beyond empirical control. Throughout the novel, the revelatory style of narration suggests predestination or the unveiling of some sort of sublime, metaphysical occurrence. I was left wondering why the author ironically named the boy “Deogratias” or “thanks be to God.” I also found myself objecting to the apparent lack of human agency (the characters appear as sleepwalkers) in the narrative which implies an ideological complicity with predestination that affects the interactions between the social, economic and political forces that constitute the story.

Lesson Plan Ideas:
This graphic novel could be taught in conjunction with a unit on the Rwandan genocide. The students would be asked to research news stories on the subject from the archives of at least five reputable agencies to include Reuters, The British Broadcasting Company, The New York Times, the United Nations report on the genocide and several publications local to the country of Rwanda. They might be asked to discuss the rhetoric of Deogratias in their journals and contrast this narrative with actual news accounts. A class discussion would follow in which each student would summarize their interpretations as juxtaposed with factual reports contained in their journals.

DEOGRATIAS could also be used as a springboard for sociological studies in which the students will research the ways in which societal contingencies – economic, religious, ethnic, political and governmental – influence the moral development of a person.

The students might conduct research on what constitutes sociopathic behavior and discuss their findings in their journals.

After reading DEOGRATIAS, each student might form a single theory regarding the cause of Deogratias’ mental state. The students would write one paragraph in their journals explaining their reasoning. The students could conduct research on drug addiction, alcoholism and insanity and apply factual information to their own interpretation of DEOGRATIAS and their individual line of reasoning.

The students could research the history of Rwanda, ethnic identities, the United Nations’ policies and the role that other forces played in the perpetration of the genocide. The historical research could be conducted in conjunction with a “Deconstruction” exercise in which the students gather a list of ethnic characteristics of Hutu and Tutsi through their research. They would construct a binary list of opposites and then identify places in the novel in which those binary distinctions are undermined or proven to be false.