LA PERDIDA: A REVIEW FROM A UTEP GRADUATE STUDENT 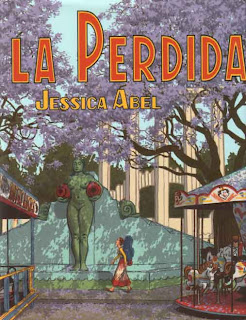 
This graphic novel is a page-turner and definitely contains all the necessary elements for a narrative saga. In spite of this, there is something intrinsically offensive in the rhetorical framework that appears to be substantially essentialist as certain traits are portrayed as intrinsic or mandatory to the state of existence that governs the lives of a country and its people. If an uninformed reader who has never traveled or been exposed to Mexican culture were to read this, he or she would come away with a linear view of a culture driven by the drug trade, governmental anarchy and rampant violence that is categorically directed at women.

And yes, I understand that this novel is conveying an ex-patriot experience in Mexico City, but I feel that the rhetorical implications extend far beyond that singular dynamic. Furthermore, a binary is established that positions Anglo American culture and society at a distinct advantage. From the beginning, the half-Mexican Carla Olivares and her Anglo one-time boyfriend Harry, are portrayed as possessing intrinsic or “a priori” privilege that is God-given and serves as a veil of protection. Also the tone of the plot dynamic suggests that both Harry and Carla are rooted to an institution that affords a sense of balance and stability that they can always return to when they tire of wild living.

The social ties that connect them to the United States and their families are identified as through legitimate means via stable family situations and the sound economic practices of their progenitors (although Carla is of lesser means, her family appears to be established and not due to any swindles). They are also positioned within the novel as the object of covetous thus spawning and nurturing the notion that the American capitalistic lifestyle is what is the most desirable and the viable yardstick through which all other groups are gauged and accessed.

The Mexican nationals are primarily portrayed as degenerate, conniving, abusive and amoral individuals who prefer criminal activity to legitimate channels of economic endeavor. Furthermore, for the most part, the Mexican nationals are portrayed as foolishly earnest and ignorantly sloppy desperadoes who are really never even afforded the rhetorical gift of potency as competent criminals. With the exception of a few obscure friends of Carla’s brother Rod, the Mexican characters are absorbed in the full-time task of attempting to perpetrate a scam on someone. With that in mind, the plot develops into a full scale kidnapping of Harry which leads to Carla’s eventual involvement and several murders. Even the Mexican Communist revolutionary is exposed as a blatant hypocrite who is another complicit agent in the plot to obtain the fruits of capitalism through extortion.

The novel does not offer a satisfactory anecdote. Yes, Harry’s father is revealed to be the owner of some imperialist companies exploiting conditions in Mexico but the information is given as an aside. And yes, I get the sense that the primary cartel leader may be an ex-patriot American posing as a South American. Still, the ending reaffirms the initial assumptions of the novel. Nothing in the plot offers an alternative point of view that would usurp ubiquitous assumptions or suggest a route towards change. Harry and Carla Olivares survive the ordeal with their special status and privilege intact.

Now I must admit that the information given does not offend the boundaries of verisimilitude. There is an aspect of existence here on the border in El Paso and in Mexico which somewhat parallels the lives of characters in LA PERDIDA. (I have lived here for 24 years.) I have personally known various such desperadoes living on the edge of existence and peddling for any little, minute advantage that will carry them into the next day. And yes, I would dare say that certain cities could be considered as sustained through drug economies.

When you have a city in which the median income is $15,000 and sixty percent of the student populations of the various school districts are receiving free and reduced lunch and yet a percentage of these same students live in $400,000 homes and when many homes are bought with cash, you know there has to be a source of unreported income. Yes, this side of life exists. And yet this is not adequately representative of the Mexican community. There are many families who reject this drug related lifestyle and who work earnestly at legitimate jobs. There are a significant number of individuals with advanced college degrees and strong cultural ties. There are those with engineering and medical degrees who attend symphonies and send their children to catechism and violin lessons.

Contrary to the suggestions of LA PERDIDA, not all Mexican men beat women and act like prolific gigolos. Thus, the novel does not offer a balanced view of reality. Ironically, the main character Carla, assumes responsibility for the deaths of two of her close, drug dealing friends, who upon her suggestion, seek asylum in the American embassy. I feel that the author needs to assume responsibility for such a linear view of a culture. Incidentally, in her long list of acknowledgments, Abel only mentions two people with Mexican surnames who assisted her in this project.

Lesson Plan Ideas
One project might be for students to look at the way both English and Spanish are used in the novel. Initially, the author has the characters speaking in Spanish with English translations. As the story progresses, and the main character Carla learns Spanish, the English translations merge with the Spanish. Then the novel becomes a dialogue in strictly English but it is not standard English. This English conveys literal translations of Spanish phrases into English. As most of us know, the literal translations do not always convey the meaning as it is intended. I believe this is done in order to convey what incorrect Spanish would sound like to a native speaker in a manner that English speakers can identify with.

Students might compile a list of Spanish words in the novel and couple these words with their English translations and various connotative and denotative meanings.

Students might engage in a deconstructionist exercise in which words and phrases that are presumed to be analytic or true by definition are examined for flaws in interpretation and meaning. The students might construct two lists of words with opposite meanings or opposing characters on opposite sides of a page and reserve a middle section. In this middle section, they can describe ways the words with opposite meanings and or opposing characters are not so different. They will look for flaws in binary distinctions between words and their meaning, concepts and people.

This novel could be paired with an essay entitled The Task of the Translator by Walter Benjamin. Students might read the essay and identify key arguments regarding what constitutes a good translation (a translation need not always be an actual translation – it could be rhetorical or figurative) or a cultural communication. Then they would examine various rhetorical strategies and literary elements in LA PERDIDA and decide whether the ideas suggested by Walter Benjamin can be found or not. This novel could be paired with a book on cultural studies or politics such as: