A.D.– AFTER THE DELUGE: A REVIEW FROM A UTEP GRADUATE STUDENT 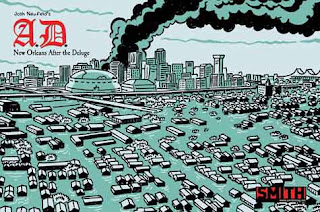 
A.D. is the story of the aftermath Hurricane Katrina left in New Orleans as it is intertwined and told by people that lived in New Orleans at the time; and how their lives were changed by one common event. The novel retells the events of Katrina in the lives of five people (Leo, the doctor; Kevin; Hamid; and Denise) and their families and friends. During the hurricane and its aftermath, each of the individuals must make a decision or are part of a decision, of whether to stay and wait out the storm or leave (just in case) and return when it is safe to do so.

In the case of leaving, Leo and his girlfriend Michelle decide to leave and stay with a friend in Houston, Texas; Kevin and his brother are sent to California to stay with a family friend. This includes Hamid’s family, who he sends to Houston while he and his brother decide to stay and look after his store. The doctor also stays, only because he thinks it is one of the “usual” storms that NOLA gets; while Denise must stay to care for her mother and her niece and her baby.

The novel begins on Monday, August 22, 2005, as the hurricane is nowhere to be found and slowly starts to grow; ends on September 1, with a follow up 1 ½ years later on February 6, 2007, when all the individuals in the novel tell Neufeld what they returned to and how they are doing now. It has been said that you can never go back home, as far as leaving home and returning later on and realizing things have changed. But A.D. certainly is a twist on this idea; whether you stayed home or returned after being forced out, due to factors not in one’s control, home is definitely no longer the same.

A.D. is a perfect novel to use when learning about the human system and experience. How not only man can affect nature, but how nature can also affect man; and from it, what could, is, can, and has been done since to present or alleviate such disasters and human suffering during natural crisis. Being that the novel is accessible online, soon to be out in print, it gives great links to add to the story/occurrences of Katrina to better help in learning and precariously experiencing the event. The following are exercises for the novel:
Posted by Mr. Wilson at 2:07 PM

If I remember, this was a serial comic -- published in pieces -- and I read parts of it as it was coming out. I agree that it brings up a lot of interesting themes for learners.
Nice review
Kevin