BILLY BATSON AND THE MAGIC OF SHAZAM! 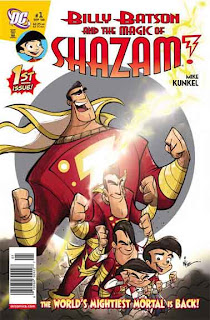 
STORY SYNOPSIS
Family-less Billy Batson is a street kid with good ethics who is chosen to be the savior of the world. The wizard Shazam gives to Billy the power of the wizard’s name:

S for the wisdom of Solomon,
H for the strength of Hercules,
A for the stamina of Atlas,
Z for the power of Zeus,
A for the courage of Achilles, and
M for the speed of Mercury.

When Shazam is spoken, Billy magically morphs into an adult superhero known as Captain Marvel. Set on doing good, Billy seeks out his orphaned sister, Mary, and she too is granted the power of the name. Together, the two battle the forces of evil beginning with the wizard’s first prodigy, Black Adam, who fell from grace and uses the cunning and enticing power of the seven deadly evils to wreak havoc and chaos.


REVIEW
Why read another comic about a muscle-popping, uber-moral, caped super hero meant to save the world from utter destruction when you can simply read Superman? This very question makes most readers pass by any incarnation of the Shazam-reciting Captain Marvel.

It would be a mistake, I think, to pass on BILLY BATSON AND THE MAGIC OF SHAZAM simply because Captain Marvel offers a vastly different experience than Superman. (By the way, both characters are property of DC Comics.) Billy Batson and Captain Marvel have a built-in gateway into the imagination of children with the very manifestation of the characters. Typical youngster, Billy Batson, need only speak the word “Shazam!” and his small frame is transformed into the heroic, powerful and adult-sized Captain Marvel. What imaginative child hasn’t dreamed of saving the world and being the hero and envy of the world? In their young eyes, to be an adult is to live free from mandates. To be young ….

The magical journey from boy to man is only a physical thing, which is the other wonderfully significant and defining characteristic of Captain Marvel. Billy may become a superhero, but he still has the mind and morality of a boy, giving this super hero an innocent quality that is most endearing.

Kunkel understands the childlike nature of Captain Marvel well and designs the stories, both the text and images, from the perspective of kids. Case in point: The orphaned Billy and his younger sister, Mary, are due for a parent-teacher conference, which is hard to do when they have no adults in their lives. Billy must become Captain Marvel, then disguise his super-self as a typical father. I felt for Billy when he tried to tie his necktie; he’s never had a man teach him how. The dialogue that transpires between Billy and the adults is cackling funny. Poor kid tries so hard to talk like a grown-up.

Amazingly, this boy and his even younger sister manage to be great, upstanding citizens despite the fact that they have no real parental figures in their lives, except the elusive wizard. It is Billy’s compassionate nature and depth of character that make him qualified to be the hero the world needs. These qualities are why the wizard chose him in the beginning.

Another interesting aspect of BILLY BATSON AND THE MAGIC OF SHAZAM is the allegorical nature of the story to Christianity. Like THE LORD OF THE RINGS and THE CHRONICLES OF NARNIA, there are strong religious themes present in the title.

The wizard Shazam represents God, while Captain Marvel stands for Christ, with Billy and Mary as the apostles. Black Adam, of course, is our Satan figure – fallen from grace – who is the agent of evil and chaos. By simply calling upon the name of the Godly wizard, Billy and Mary have the power to stop Black Adam and evil. Together, these themes create a chance to study the characters beyond the superficial.

If that wasn’t enough, BILLY BATSON also gives the reader a heavy dose of nostalgia with its accompanying secret code in every issue. It’s not just notes written after the fact, but pieces of the story are written in code. A super decoder ring is not necessary as the key is provided in each issue. Talk about keeping kids busy, give them a code and a key, and they will be busy little bees. You can click here to for an online key to the code.

BILLY BATSON AND THE MAGIC OF SHAZAM have a lot to offer students and teachers, specific themes and characteristics that are especially interesting to kids and necessary for proper developmental. Above all, it is a fantastically crated story.


ART REVIEW
Not only does Kunkel write an outstanding yarn, but he illustrates it with soul and passion. The characters are so full of expression and the story unfolds so smoothly that it is hard to put down. Kunkel does a good job giving the reader the origin story, without taking up too much time. He separates his explanatory narrative sections with a more sketchy notepaper, child-like imagery, which scaffolds students so they can make sense of the different styles of storytelling. 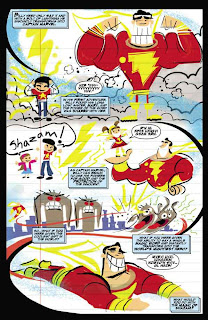 This is an example of the pages describing Captain Marvel's back story.
Notice the pages looks as if it is created on a page of notebook paper. 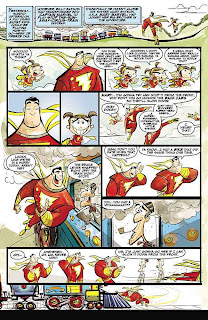 This title is perfectly appropriate for all ages, but the reading level is best suited beginning with the average third grader and older. However, with help, younger students could also enjoy this title.


IN THE CLASSROOM
Not only does BILLY BATSON AND THE MAGIC OF SHAZAM offer a superb story with artfully crafted illustrations making it easy to teach literature in the classroom, but it has deeper implications to students: connections to the young imagination through child superhero aspects, strong character development and morality.

The private, faith-based school has an additional advantage as they are able to use the Christian allegory to teach Biblical principles through modern and high quality story telling, something that is often hard as many of the religion-based texts can be trite. It should be noted that these religious themes are not necessary to enjoy the book, but are simply another avenue for understanding.

As for the code, well teachers could easily make use of that in a classroom and connect it to mathematics, real-life and also plant career seeds.


CHRIS’ RECOMMENDATION:
Highly Recommended
This is one of the top titles offered by Johnny DC as it presents a fully articulated and intelligent story to youngsters – a story that can be read superficially as well as with increasing depth and complexity, depending on the need of the readers.