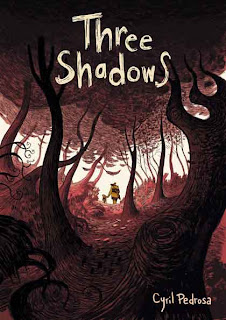 I have two kids (a girl, 6, and a boy, 2) and there is something undeniably visceral that happens when they come along: you imagine how completely, utterly, unashamedly violent you would get if they were ever threatened. The feeling is ancient. In my normal life, I galumph along in a self-conscious and well-meaning haze, but in my dreams, I just imagine how gruesome it would get if anyone, anyone, even thought...

THREE SHADOWS mines this deep atavistic vein. A mother, father, and their little boy gambol in the fields and in the woods in the French countryside, living their lives in a gentle, Normandy Rockwell paradise. Gradually, the parents become aware – first in dreams and later in reality – that three horsemen are watching them from the hilltops. They tell themselves that they're just horsemen, that they aren't a threat, that there's nothing to worry about, but they know it isn't true. The father, Jules, decides to take the son far away from their home in order to save him and quickly finds that he is being chased and strangely protected by the three enigmatic figures.


ART REVIEW
The art takes advantage of several aspects of the graphic novel which are harder to achieve in other media: series of wordless panels; swirly, impressionistic art; and a sense of impending dread that colors even the early scenes of familial bliss. The effect reminds me of Craig Thompson's BLANKETS, which used a similarly swooping line to capture the teenage obsession with love and identity. Here, the father is rendered in humps and broad expanses of flesh while the mother is angular and petite. The horsemen often become so sketchy that they seem like crude scratches on the page. The effect is a hallucinatory parable rather than a realistic story, but leavened with an attempt at finding meaning and transcendence out of misery.


HOW A TEACHER MIGHT USE THIS
Students might have a hard time identifying with the plight of the parents, but the power of the narrative and the artistic vision might surprise them. In my class, I've had success with strong, emotional narratives such as PRIDE and DEOGRATIAS that leverage the visual components of the graphic novel to tell complicated, challenging stories in innovative ways. THREE SHADOWS has the potential to be used as a supplement to books about fate and our place in it such as: OF MICE AND MEN, MACBETH, and even THE ODYSSEY.