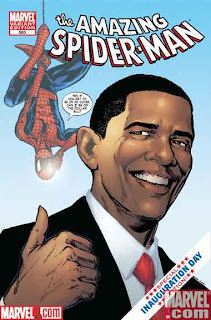 
REVIEW
Is it pure marketing to put President Barack Obama on the cover of the latest Spider-man comic? Of course. Does it work? Certainly, the inclusion of the popular new president during the week of the inauguration has helped sales of THE AMAZING SPIDER-MAN (No. 583) fly off the shelves. At my local comic book store (Modern Myths), I put in a reservation for the comic a few weeks ago, and was told that the first shipment could not fill all the pre-orders, and I had to wait. I finally got the comic in the second shipment and the salesman said the response to get a copy has been overwhelming (the comic is now on its fourth printing).

However, as I was placing a second order to get a copy for my sons, he made sure I understood that I should not view this comic as some sort of valuable collectible. "It won't be worth much," he said. "Buy it because you want to read it."

Who knows. For me, I wanted to see what the folks over at Marvel Comics were up to. It's an interesting concept but the storytelling was, well, underwhelming.

The Spidey/Obama story is sort of a comic within a comic and relegated to the back of the book. In the plot sequence, an evil Obama twin appears and Spider-man has to help figure out which president is the real president (while taking some comedic pot shots at Vice President Joseph Biden along the way). An old foe of Spider-man, Chameleon, wants to change places with Obama and be on the stand to take the presidential oath of office. I'm sure he has some nefarious ideas in mind for our country. Spidey foils the plot and Obama gives a little victory speech, and the story concludes on a hopeful note.

In an recent interview, the legendary Stan Lee (who was not one of the writers of this story but still has a strong hand at Marvel) says the idea of the book came from reading that Obama was a fan of Spider-man and other comics as a kid. (You can read the full interview here.)


ART
The artwork here is typical Marvel Comic fare, with Obama looking quite presidential in his comic book cameo, although there are times when Obama's comic persona looks a little strange and distorted. The cover of the book shows Obama giving a thumbs up to the world, with Spider-man dangling from a web in the background. The art doesn't stand out as anything spectacular, but it works for this particular story.

FOR THE CLASSROOM
Honestly, the story itself lends very little for the classroom, although I expect that young readers and fans of Spider-man (and Obama) will flock to the book just to find out why the new president is on the cover of a comic book. That's why I bought it, and that's why my sons immediately took it out of my hands. The comic might allow some discussions about how icons are created in this day and age, and would Sen. John McCain have been on the cover if he had won the election. (I'm not sure about that).


MORE INFORMATION
Cost: $3.99 (although some folks are selling it on ebay and other sites for more than $100). You can preview some of the frames through the USA Today site. To purchase, you will likely need to contact a local comic book store near you (you can use comicshoplocator.com to find a store near you, but not all comic shops are listed because they have to pay for the advertisement).


RECOMMENDATION
I would recommend this comic, if only for capturing the moment in time when Obama has a high approval rating. It's worth the four bucks, but not much more, in my opinion. There is nothing in this comic that would likely offend anyone, and it would be suitable for upper elementary through high school students.