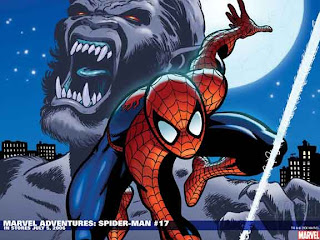 REVIEW
I started reading AMAZING SPIDERMAN when I was 5 years old and I was intrigued how a high school kid could be so bullied and his family life so rough, and yet he had these incredible powers. When Peter Parker put on the Spider-Man costume he would transform from a shy nerdy kid into a confident wise cracking superhero. Since that time, I have remained a dedicated fan of the web slinger.

As Spiderman, he would fight against super villains of all sorts – some were crazy and fun and others were dark and deadly. The one consistent and important aspect in all the many stories was that the villains were not dumbed down for children. The villains were always a threat to society and to Spidey. At the same time, they were never too insane or dark for younger readers. It is difficult to keep that balance especially when many other comic books move to one extreme or the other.

One of the attractions for me was Peter Parker. His life was always worse than mine. The memory and guilt surrounding his uncle’s death drove him to be Spiderman when it would be much easier to just quit. Aunt May, his guardian, was always the positive voice that reminded Peter that life has a way of working out even when things seem bleak. Her optimism and strength were unwavering even when they were behind on bills or facing deep personal issues.

I was more than pleasantly surprised. MARVEL ADVENTURES: SPIDER-MAN achieved that perfect balance between Peter Parker’s life as a teenager and his life as a super hero. This is the comic I remember as a child and I am thankful to Sean McKeever for giving a new generation of readers the Spider-Man I remember.


STORY SYNOPSIS
Issue 5
Electro seeks revenge for Spider-Man beating him in a previous fight, by setting up a super-charged ambush for Spidey. Meanwhile Peter is worried about money issues since the bills are overdue and Aunt May cannot pay them. Peter continues to get picked on at school by the bullies, and Jameson of the Daily Bugle continues to be a pain for both Peter and Spidey.

Issue 6
A class trip to the art museum turns into more excitement than Peter expected. There are scenes with bully Flash Thompson verbally sparring with Peter ending in Peter getting in trouble from the teacher. Sandman is transfixed on a painting and becomes agitated when security confronts him about standing in front of the painting for hours. Sandman steals the painting because he cannot be away from it. The owner of the painting offers Spidey a reward to bring it back. With all the financial issues that Aunt May faces, Spidey takes the job. He tracks down Sandman who is still engrossed in the painting and does not want to fight. Only when Spidey tries to take back the painting does Sandman attack him. A fire starts but Sandman is unwilling to leave the painting. Spidey has to choose to either save Sandman or the painting. The owner of the painting is very unhappy that Spidey chose to save the life of Sandman over his priceless piece of art.

Issue 8
Peter is on his way to meet Liz Allen for a “study date” after selling the Bugle some Spidey photos. Peter cannot believe his luck has changed. He changes into his Spidey persona to make better time getting across the city. He stops to catch a teenage thief and runs into the Scorpion. Spidey thinks he has the Scorpion all webbed up and rushes off to meet Liz. The Scorpion has made improvements to his suit and easily breaks free. He then chases Spidey across the city seeking his revenge. There are some really funny scenes where Spidey gets knocked into the Hudson River and has to go to the Laundry Mat to wash his street close. He then goes through the automatic car wash to rinse the stink on the Spidey costume. In the end, Spidey beats the Scorpion and rushes to meet Liz. He finds her having coffee with his bully, Flash. The study session was supposed to have been the day before. Poor Peter!


Issue 9
It is Fantastic 4 (FF) appreciation day and Peter is not excited about it. He is a bit resentful that there is not a Spider-Man appreciation day. The only other person at Midtown High who is not excited about the FF is Flash Thompson. Flash is Spidey’s biggest fan. Peter notices a couple of suspicious guys lurching around. He follows them through a portal onto Dr. Doom’s spacecraft. Doom has a plan to magnify the sunlight to kill the Fantastic 4. All the fans will just be acceptable losses with the death of the FF. Spidey has to out think Doom to take over the ship and saves the day but gets no credit for it.

Issue 12
Peter is stuck in a nightmare that he cannot wake up from. The nightmare involves everything from public humiliation with high school hottie Liz Allen to the classic only being in his underwear at school. The mystical character “Nightmare” loves the negative energy. Positive thinking wins out in the end.

Issue 17
Peter attends a prep rally for the football team, which becomes an “I love Flash Thompson” rally. Peter is upset with wasting his time. On his way home, he witnesses Flash running out of an old scary old house. Peter watches as Flash transformes into a werewolf. Spider-Man webs up Flash and takes him to Dr. Strange. Dr. Strange tells Peter that he has to get the fur of the werewolf that bit Flash. Reluctantly Spidey goes out to save the bully that makes school miserable.

Issue 18
Peter goes on a school trip to Florida to watch a NASA launch. The launch gets scrapped and Peter is stuck in sunny Florida without his swimming suit. He sees a plane go down in the swamp. He swings out to find out what happened. A few bad guys brought the plane down and are looking for the pilot and his daughter. The Man-Thing shows up and helps the little girl. Spidey misunderstands what the Man-Thing is doing there. A battle begins between the two until the other bad guys try to hurt the girl. Spidey and the Man-Thing team up to take down the bad guys and save the pilot and his daughter.

Issue 19
Peter went to the New York Natural History Museum to see the latest dinosaur finding. He bumps into Liz Allen at the museum. Professor Lee and Professor Kirby introduce the finding, which is a tribute to real life comic legends Stan Lee and Jack Kirby. Very funny. A lightning strike brings “Fin Fang Foom”, a dragon like alien, to life. He grabs Liz and takes off with Spidey in hot pursuit. Spidey cannot do much against this creature. Finally the creature realizes that he is the only one left of his kind, drops Liz, and leaves New York for the solitariness of the artic.

Issue 20
Halloween is not a pleasant time to be the school nerd. Flash gives him the usual hard time. He bumps into the hero archer Hawkeye at a warehouse smuggling site. Spider-Man and Hawkeye easily take down the thugs, then find a crate with the Frankenstein monster. Frankenstein breaks free and wanders the streets on Halloween night and ends up at the Midtown school dance. They chase him out of the dance to the pier where Frankie falls through and ends up at the bottom of the Hudson.

Issue 40
On his way to school, Spidey stops a mugging of a young lady. Unknown to Spidey, she is the Norse god Enchantress. Spidey leaves quickly so he can get to school to get his assignment on Norse Vikings. Amora, aka Enchantress, follows Peter and confronts him. Then she uses her charms to make him her “Champion” and to transport him to Asgard. She empowers Spidey with god-like powers along with his usual spider powers. Only a confrontation with Thor is enough to knock him out of the trance and to save Asgard. This experience does give Peter an interesting report on the Norse Vikings.


AGE RECOMMENDATION
My Rating: Ages 6 and older
Publisher’s Rating: All Ages
The younger kids will not be able to read all the words but should be able to follow the story with the pictures.


BE AWARE
There is traditional superhero action and mild violence.

IN THE CLASSROOM
Many of these issues can be used in character education and guidance counseling sessions. There are lessons about taking responsibility, bullying, and acceptance.

My 7-year-old daughter really enjoyed a couple of these issues. She usually does not like boy superheroes but she enjoyed this series. A few of the words were beyond her vocabulary but she was able to use the art to find the context and figure out the story.