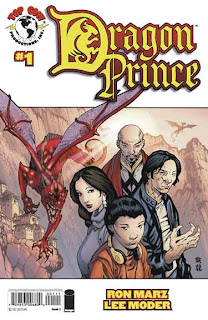 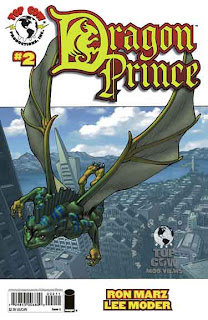 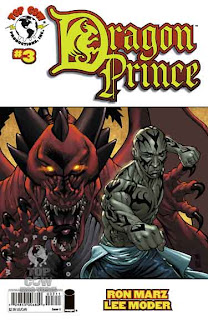 
REVIEW
Half-Caucasian and half-Chinese 14-year-old Aaron – dubbed “white rice” by the schoolyard bullies – is awkward and alone, and he’s not dealing well with his bodily changes. His special brand of adolescent transformation bubbles to the surface when he finds out he is not only bi-racial but bi-species. During an altercation with his formidable thugs Aaron turns green and spits fire, setting one of the bullies on fire.

This incident sets into motion a new world for Aaron as he discovers he is half-human and half-dragon, the last of his line, a hunted breed on the brink of extinction. Once his truer self comes through, the great enemy known as the Dragon Hunters become aware of his presence and prepare to extinguish him.

The first three issues have a steady and heavy pace consisting mostly of flight and survival. The Dragon Hunters are quick to pounce on Aaron and his mother – capturing them – and Aaron soon learns more about his past than he was ready to know.

The story pulsates with energy and action, and bleeds inner turmoil and tension. The story has conflict and drama that readers who enjoy fantasy, magic and dragons will devour. The only negative about the story are the lightly peppered curses throughout, rendering the title inappropriate for some schools and classrooms.


BE AWARE
In issue #1 there are two bullies who curse. The main bully says, “I swear I’m kicking his ass anyway”, when referring to our protagonist. Two panels later, the bully’s toady asks, “What the hell was that?” In issue #2 the head magi of the Dragon Hunters says, “Damn that boy.” It should be noted that Aaron is reprimanded by his mother for his language when he says, “crap”. This establishes a divide between acceptable language of heroes and protagonists and the language used by villains – a literary device that can be taught to students.

Not all of the advertisements are entirely child friendly or all ages. The ads promote some titles meant for older audiences such as: Witchblade, The Darkness, Wanted, and Impaler. There are also magical themes and sorcery involved.

If this were a movie, DRAGON PRINCE would likely get a PG rating because of the light profanity and fantasy violence.


IN THE CLASSROOM
Just like the popular HARRY POTTER series, DRAGON PRINCE has an authenticity and complexity about it that is exciting to the reader. It is powerful and engaging, making it hard to put down. For that reason alone, I think DRAGON PRINCE is important to the classroom.

The protagonist is conflicted and confused; his family is split between his mother who wants to save him and his grandfather who, as the leader of the Dragon Hunters, wants to kill him. He does not understand his own body nor does he comprehend his power and importance. Young readers love to pretend that they are special, that they possess something others do not, that they are the long lost prince to a kingdom or the only hero that can save the world. DRAGON PRINCE taps into that universal daydream and hero mythology giving kids a reason to read, especially boys. Curses or not, I think it’s a great story.


CHRIS’ RECOMMENDATION:
Recommended with Reservations
The writing is solid and the story is engaging. The art is expressive and aimed at a mixed audience. In all, the story is perfectly suited for the classroom and I believe students would really embrace this title. It's regretful that I cannot highly recommend this title because I enjoyed it so much. However, the minimal cursing and grown-up advertisements pose a possible problem especially to the elementary classroom.

If a teacher wishes to use this story in the classroom, I recommend waiting for a trade (a bound collection usually consisting of 5-7 issues). Typically these do not have the advertisement issues, found in the monthly comics, making objections much less.