TALES FROM THE CRYPT: DIARY OF A STINKY DEAD KID 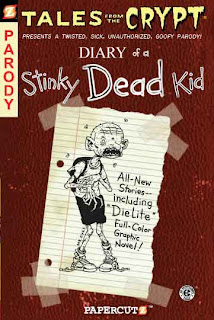 
REVIEW
TALES FROM THE CRYPT Vol. 8 takes back the parody genre, lampooning DIARY OF A WIMPY KID and TWILIGHT. I no more than opened the book when my fourth grade daughter snatched it and read the entire book in one sitting. When we went to the park later that afternoon, I took it along to see for myself what she enjoyed in this multi-story.

In the vignette, Diary of a Stinky Dead Kid, Glugg our zombie-to-be, is a normal (and quite ugly) kid. One day headed for a school field trip he gets shoved onto the rail system’s tracks and electrocuted. Death would not be so bad except his mother botched his reincarnation spell, leaving him a flesh-eating zombie. Poor guy.

His predicament would be tragic if it were not so entertaining. Glugg’s best friend, Crowley, rips off Glugg’s arm only to reattach it backwards. Then his brother, Rock, tries to sell his soul to a demon. The guy simply can’t catch a break.

Glugg finally connects with other zombies. They end up in a Guitar Zero competition with a group of gaming nerds. It should be no surprise that zombies cannot compete with geeks. What do they do? If you can’t beat ‘em, eat ‘em. That’s just what the “Z’s” did.

DieLite is the story of Lou Anne Lugosi, high school student, who could care less about lovesick vampire, Deadward. Her problem is that he won’t take the hint. “He was different from the boys back home,” she thinks. “He looked young, but inside he seemed more like one of those old men on To Catch a Predator. He was … bizarre.” Lou Anne’s sardonic tone was a nice jab at the adolescent love affair that is TWILIGHT.

While I enjoyed Diary and DieLite, I wasn’t so impressed with the third story, Carrier. The fact that it was a continuation of a story in vol. 7, should account for my feeling lost. I might like it better had I read the beginning. Stories tend to be better when you don’t just read the ending. That’s my problem not the book’s.

Various artistic styles accompany each story, a requirement when one book contains such different story lines. While Diary is sketched out exactly like it’s real counterpart (i.e. notebook paper and cartoony art), DieLite has a dark painted feel.


SOPHIE’S REVIEW (age 9)
I really like the book because it is a very gruesome comedy. It has great illustrations and it makes fun of DIARY OF A WIMPY KID and TWILIGHT and it is Halloween-like.

Papercutz generally promotes their titles for kids. Normally, I agree with them on the age rating; however, this volume contains enough semi-language and blood that I might hold off giving it to students until middle school. Keep in mind that I was perfectly fine with my own 9-year-old reading it.


BE AWARE
“Hell”, “crap”, “sucks”, “mother trucker”, “we have to control our burning passions”, a demon, and spells are all present.


IN THE CLASSROOM
While the book does contain some language and themes that might upset some parents of elementary-aged students, it also has some really funny scenes that kids could make strong text-to-text connections. I think the Diary stories are less objectionable than DieLite.

If provided in isolation, I think it would be creative and inventive for students to study Diary and then create their own parodies of books they have read. How would they make fun of the books or characters. What messages might they send to the reader? Who would be the appropriate audience for such a story? The intended message and understanding of audience are both national standards. Creating a unique piece is a higher order thinking skill.