GROWN-UPS ARE DUMB! (NO OFFENSE) 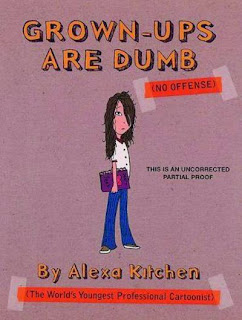 
STORY REVIEW
The title of this book is catchy and, written just below the author's name, is this blurb: "The World's Youngest Professional Cartoonist." That had me intrigued and so I sat down one night with GROWN-UPS ARE DUMB! (We're not! Really? We just seem that way sometimes, kids) and fell in love with the comic mind of young Alexa Kitchen.

GROWN-UPS ARE DUMB! is not a graphic novel but a collection of comics created with loving care and quirky humor by a 10-year-old comic artist. Kitchen (who must live in my area because her bio says she resides in Western Massachusetts) was nominated for both a Harvey and an Eisner award – making her the youngest nominee ever. That's pretty impressive and you can see why she was nominated as you peruse her work.

GROWN-UPS ARE DUMB! is a series of comics around some main characters, including Molly. The opening comic shows Molly sitting at her seat in the classroom as the subjects of the day roll by (Math, English, etc.) with an expressionless face until dismissal, and then she is on her feet in celebration. Another character, Lucy, is clearly a kid on the cusp of some independence, but maybe not quite ready for it. When her mom leaves her alone (and then waits five minutes), Lucy is caught eating on the couch and watching television. "Ha! Gotcha!" says mom, and the look on Lucy's face is priceless. One longer form story – called Noise, Pens and Annoying Little Brothers – is a sweet ode to a typical day of the trial and tribulations of a young teenager, ending with the main character going to sleep, hoping for a better day tomorrow.


ART REVIEW
Kitchen's art in this book is just perfect. The expressions on the faces, the minimalist backgrounds and the use of pink as a shading color, with black lines and white backgrounds, gives the book a distinct feel. It's clear that she has a fine eye for her characters and knows kids inside and out. In fact, her humor is right along the lines with my own sons and my own students (sixth graders) but it is her artwork that really sets her apart from others. It's interesting how she has developed her own style at so early an age.


IN THE CLASSROOM
It's not often enough that we can share work from a published writer and illustrator who is roughly the same age as our students and so I see this book as a very valuable commodity in a writing classroom. I also see that Kitchen's last book, DRAWING COMICS IS EASY (UNLESS WHEN IT IS HARD), is all about how to make a comic strip from the perspective of a young comic – interesting. She wrote it when she was 7.

There is a lot to be said, too, of how Kitchen develops the handful of characters in this collection. We immediately understand them, particularly if you have spent any time around children. Add to the fact that her characters are girls with strong opinions about things and you have an interesting resource.

I would highly recommend this book. It is likely more appropriate for the middle school classroom but it has a place in any elementary or high school library, too. I think young artists, writers, and lovers of comics would find something of value in GROWN-UPS ARE DUMB! and you know as I know that title is sure to grab someone's attention.