OUTLAW: THE LEGEND OF ROBIN HOOD 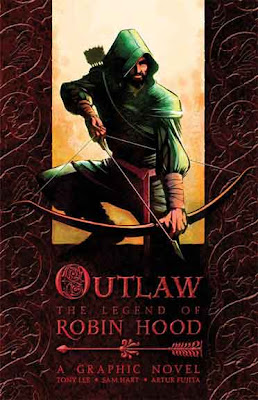 
REVIEW
The Robin Hood stories I’ve been exposed to have always started with an adult archer-extraordinaire. OUTLAW: THE LEGEND OF ROBIN HOOD is the first piece of literature I have read that gave me such depth into the childhood experiences that drive Robin Hood to do what he does. I care for and understand the charitable thief and root for him because of his back-story.

Writer Tony Lee spends time developing the character before our hooded protagonist even thinks about robbing the usurping aristocracy and wreaking havoc across the land. His character story continued through the end, culminating for me in one particular scene. I tip my hat to Lee who created an emotionally stirring scene when King Richard the Lionheart returned. I was captivated by the story as I watched King Richard disrobe his peasant garb and reveal his kingly crimson breastplate emblazoned with three golden lions. It was goosebumbs worthy and I sat and gazed at the page for several minutes allowing the story, the scene, the beauty of the moment rush through me.


ART REVIEW
Sam Hart’s choice of heavy inks and strong contrast makes for a mysterious style. In doing so he also dispensed upon the reader two problems: character differentiation and weak backgrounds. The style is wonderful and artful, but is executed to the point that I often found myself confusing characters causing me to flip back and reread scenes to determine who was speaking or committing a particular action.

With a heavily inked and contrasted illustration also comes a less detailed background, which was overly minimalist probably in order to portray the characters.

The battle scenes, on the other hand, were tastefully executed being neither too complicated nor too bloody.

Because of the cursing I would likely place OUTLAW: THE LEGEND OF ROBIN HOOD on the Restricted Reading list for elementary students, but offer open access beginning with middle school students.


BE AWARE
There are numerous times – a half-dozen or so – when characters curse with a mild “hell” or “damn”.


IN THE CLASSROOM
It should go without saying that Robin Hood offers a wealth of discussions about society, wealth, poverty, types of governments, birthrights, taxation and terrorism. I would think that a unit about government and democracy could come alive when combined with the Robin Hood story.

This very idea demonstrates how a book can be used with students of varying ages and maturities. A young student could read ROBIN HOOD on its surface and explore the five elements of fiction, relish the hero story, and use it to learn about different governments. The older student can deeply explore the themes and answer the hard questions. All can enjoy the story on their own level and connect it to their own lives in some way.


CHRIS’ RECOMMENDATION:
Recommended
Posted by Mr. Wilson at 8:02 AM