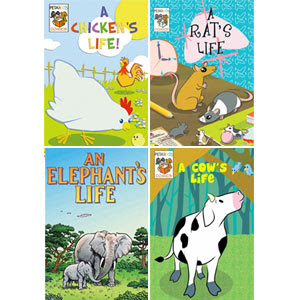 By Kevin Hodgson
Staff Writer
STORY REVIEW
I am always curious about the ways in which comics can be used as rhetorical devices. Sure, many comics are just for entertainment purposes (although, as a teacher, I try to look for use beyond the story itself). But many political groups long ago learned that one way to get a message out to a broader audience is through the use of something familiar and comprehensible, and the comic format often fits the bill.

Not long ago, I ordered some free comics from PETA (People for the Ethical Treatment of Animals). I am not a member of PETA and I am often appalled by some of their strategies. (Tossing blood at people? Not cool, man.) So, I was curious about their offer for free comic books about the world of animals. The four comics came yesterday – A COW'S LIFE, A RAT'S LIFE, AN ELEPHANT'S LIFE and A CHICKEN'S LIFE – and I almost put them in the hands of my four year old because the covers were so cute and, well, it was about animals.

Luckily, my parental instincts kicked in and I thumbed through some pretty harsh stories and images. In A COW'S LIFE, for example, we see a tiny calf being injected with hormones from a dozen large needles. The same cow is later being cattle-prodded into a truck and then brought to the doorstep of a veal factory where he is stuck inside a tiny box. (The elephant book is about the circus, the rat story is about scientific labs, and the chicken story is about egg farms). Each book begins with a nice page about the special qualities of the animal in focus, which is a nice touch.

Listen, I know these stories are based in reality of modern day treatment of animals and I get what PETA is doing here. A COW'S LIFE is about saving a cow and about being kind to animals. These are important issues. But you are dancing on a dangerous line when you use a cute comic book aimed at little kids to teach a lesson about cruelty in the world. And I think PETA stepped across the line here. (Although, I am sure PETA is just fine with that, by the way).


ART REVIEW
The art by Ken Cursoe is colorful and simplistic, just right for young eyes (see my complaint above). The animals are both cute when being cared for and come across as terrified when not being cared for. The use of perspective – of making the cow look small while the needles look huge, for example – is effective for the message.


IN THE CLASSROOM
Obviously, these free books from PETA could allow for a strong discussion among older students about the use of comics for political and rhetorical purposes. It might also spark a discussion about how early a parent might introduce such a controversial concept and I am sure you could fashion a debate about animal cruelty versus human survival easily enough. From a writing standpoint, these comics might also provide fertile ground for students to fashion their own comics for a political purpose. How can they use the comic format for pushing forward on a controversial topic?


MORE INFORMATION
These comics are free from PETA, so you can make your own decisions about the merits of them. You just need to fill out the form at the PETA website and wait a few weeks.


MY RECOMMENDATION
This is a little tricky because while I didn't necessarily like the comic books, I can see some value for the classroom. I would suggest that these comics might be appropriate for upper elementary and middle school students, but not for younger students (despite their appealing covers). I would recommend them, but only with reservations. In other words, I would not likely just put these out on the counter without some discussion about them and the rationale behind them.
Posted by Mr. Wilson at 8:08 AM

Pretty cool site you've got here. Thanx for it. I like such topics and everything that is connected to them. I would like to read more on that blog soon.