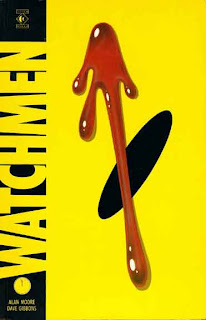 "Battle not with monsters, lest ye become a monster, and if you gaze into the abyss, the abyss also gazes into you." – Frederick Wilhelm Nietzsche


STORY REVIEW
Honestly, it is a bit intimidating to try to craft a review out of a comic book and series that almost (with help from Frank Miller's The Dark Knight) changed the world of comics almost completely. And now, it is a movie? Good lord. Suffice it to say that WATCHMEN is a dark, literary gem by writer Alan Moore that deserves its place on Time Magazine's list of Top 100 Novels. Smoldering with menace, intrigue and deep character development, WATCHMEN is an acquired taste, I think, but one worth chewing on. The story itself comes across on the surface as a murder mystery, but that concise explanation does not do WATCHMEN justice. It's more of an allegory of an alternative world where the Cold War has reached new heights, Nixon is still president and anyone trying to be a superhero has been banned from action by a law of Congress. The most powerful hero of all? A naked, blue demi-god known as Dr. Manhattan, whose power knows no bounds and who has come to care so little for the inhumanity of humanity that he begins to construct his own Eden on the planet Mars without humans to mess it up.

When one retired hero from the old days gets murdered, and mysterious things begin to happen to others, a shadowy figure with a moral universe all of his own – a clandestine character named Rorschach – hunts for clues. The story unfolds in so many ways, pushing the reader to recalculate what they have read and forcing the reader to reposition themselves any number of times. The writers assume you know how to "read" beyond just the words and that you are invested with them. This is not a story for the casual reader or the feint of heart. The movie may generate some new fans, but I think a quote I read somewhere about why even bother making WATCHMEN into a movie since it was conceived as a comic book is on the mark. It's difficult to believe that this book, in particular, can successfully translate onto the big screen. Time sequences that juxtaposition different events, shifting narratives that layer story on top of story, and grand gestures of symbolism are hallmarks of WATCHMEN and I wonder how a movie can stay true to such an ambitious book. Or maybe, it won't.


ART REVIEW
Truly, the artwork by Dave Gibbons lives up to the writing, as each frame forces the reader's perspectives on different elements of the narrative. Gibbons pulls out all the stops and the mood of the art here is dreariness, weariness and you sense the world waiting for World War 3 to begin at any moment. Which it is. There is also the fatigue of former heroes, trying to live their lives normally but unable to, and the artwork captures this fatigue on their faces. The violence, too, is not glorified, but it is deadly, and the reader winces when it comes. This is a testament to the illustrations as much as anything. The frames are also crowded with information, giving the entire story a real sense of claustrophobia. In some cases, a character is telling a story with text boxes while a seemingly unrelated story unfolds as a visual in the frame. This design, as much as the art, really contributes to the "feel" of the book.


IN THE CLASSROOM
This is not a book for young readers. In fact, this is the type of comic that many teachers will probably keep off their shelves. I don't blame them. There is violence; there is some nudity; there is some sexual material, including elements of rape (in the back story of at least one of the main characters). If you can get beyond that, you will realize that the richness of this storytelling by Moore and Gibbons in WATCHMEN and treat it as a solid piece of literature. Like some novels, WATCHMEN deconstructs our idea of a "civilized society" and inserts a big, bold gray area right smack dab in between the black and white of most people's vision of good and evil in the world. You could write whole essays on the character development here. Or develop a thesis on what power really is. Or consider the Cold War and what started and ended it, and what kept the so-called balance between USSR and the USA during that time. A writer could take WATCHMEN as a model and construct their own vision of alternative dystopian landscape and develop their own moral codes. The trick is to recognize the book as piece of literature, and not as simply a comic book.


MY RECOMMENDATION
I'll repeat myself: I don't believe this book is for younger readers. Not for middle school. Not even for young high school students. It contains much violence and plenty of sexual material and some naked bodies. It may be more appropriate for upper high school readers and those at the college level (although I wonder if any professor would dare?). That said, WATCHMEN is a tour de force in the literary world and deserves all of the accolades that it has received over the years. I highly recommend it with strong reservations.