THE HERO TWINS: AGAINST THE LORDS OF DEATH 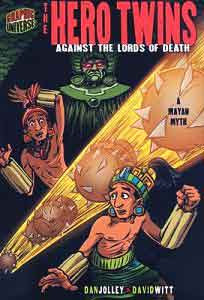 (NOTE FROM KEVIN (DAD): My sons love graphic novels as much as I do, and when a delivery comes, they are as apt to open the box as I am. They are always interested to see what has arrived and I know a book has reached its audience when the book has disappeared into their room. I am hoping to get them to do a few reviews of books from their viewpoint, to give you a young reader's impression of a graphic novel. I hope you enjoy Christian's review of THE HERO TWINS AGAINST THE LORDS OF DEATH. He dictated his review to me and I became his secretary/typist)


STORY SUMMARY
Two twins – Hunahpu and Xbalanque – who were blessed by Mayan gods and figured out that their dad's uncle was a great ball player (the Mayan sport of Pok-Ta-Pok), so the boys decide to play the sport. The Lords of Xibalba (rulers of the underworld for Mayan culture) call the boys down to play Pok-Ta-Pok against players from the underworld. The players are not alive. They are dead. The boys accept the challenge. But they have to pass through various tests in order to play the game, such as getting past several "houses" or challenges (such as the Razor House, the Cold House and more). They pass all of the tests. In the final game against the players representing the Lords of Xibalba, the boys win and get sent back up to the regular world.


ART REVIEW
The illustrations were interesting and cool. The images are dark and help tell the story set in the Underworld. If the pictures had been bright, it might have told a story of the normal world.


IN THE CLASSROOM
Students could learn some basics of the Mayan game of Pok-Ta-Pok. It might help kids want to know more about who the Mayans were. Kids would not be scared by this story. Kids might get grossed out by the scene when the twins go into the River of Pus. Yuck!


CHRISTIAN’S RECOMMENDATION
I would recommend this book for other kids. It's a good story and other kids will probably enjoy it.


Christian is a third grader in Massachusetts who loves to play basketball and baseball. He is an excellent reader, and is a member of a community boys-parent book group which has tackled such books as DIARY OF A WIMPY KID, the THE LANDRY NEWS and BUD, NOT BUDDY. He has a huge collection of sports trading cards. Christian is also the biggest fan of the Boston Red Sox that you have ever encountered, while his father is a passionate fan of the New York Yankees. There is some dispute in the house over the best baseball team to ever play, as you can imagine. But both agree that graphic novels are cool.

Great review, Christian! It's often hard to find reviews that are straightforward and well written.