THE MURDER OF ABRAHAM LINCOLN: A TREASURY OF VICTORIAN MURDER 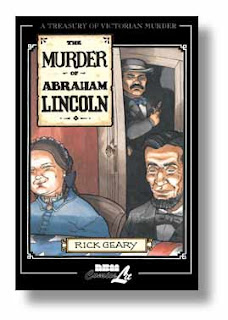 
STORY REVIEW
I am, I have to confess, a bit skeptical of graphic novels that try to teach you something. It might be because of all those after school specials where Eric Stoltz's descent into iniquity as a result of inadequate flossing left me wary of adults and their attempts to tell me what to do, or the right way to act, eat, drink, breathe, and conduct dental hygiene. Of course, now I am one of those adults. So, when I read THE MURDER OF LINCOLN I was ready for someone to try and Make Reading Fun™. Someone was going to dress up school for the young’uns: flashy, cloying, shallow.

And it's really not like that. MURDER tells the story of Lincoln's assassination at the hand of the racist, foppish, arrogant John Wilkes Booth with energy and a thick sheath of context. I guess that everyone knows the basic outline of the story of Lincoln's death at Ford Theater, but I didn't realize that Booth and his conspirators were terrorists. Their original plan was to kidnap Lincoln on the road, spirit him away to the Confederacy, and bargain his freedom with the release of thousands of rebel prisoners. After too much delaying, it soon became clear that the Secession was finally going to end in failure, especially when Robert E. Lee surrendered in Vicksburg. Instead of dissuading Booth, this turn of events enraged him and caused him to concoct a new plan that involved assassinating Lincoln, Vice President Johnson, and the Secretary of State William H. Seward in one coordinated attack.

Geary deftly takes us through the 62 days leading up to the assassination, both by detailing the unraveling conspiracy (early members of the cabal left when it became clear that Lincoln was to be killed and not kidnapped) and by exploring Lincoln's relationship with his wife (Mary Lincoln's unreasonable rage towards General Grant's wife is the reason he isn't in the theater box during the killing). Throughout there are strange mysteries and coincidences, tragedies and missed opportunities. Even a few are bleakly funny such as conspirator George Atzerodt's abandonment of the attempt to kill Johnson in favor of drunken wanderings through the city. Or of Lincoln's refusal to make even the slightest attempt to protect his own life, even though an entire Confederacy had reason to wish him ill. In fact, Booth is able to get into Lincoln's theater box, merely by presenting his card to the attendant outside.

If there is a criticism to be leveled at the book it is that it, at times, concentrates on almost mystical, prophetic moments (Lincoln tells his driver good bye instead of good night; the Secretary of War refuses to release a bodyguard for the President) in a sort of History Channel hokum kind of way, though of course, we're spared the whole Lincoln-had-a-Secretary-named-Kennedy American History Paul Harvey claptrap.


ART REVIEW
The black-and-white art is easy to understand and contains an understated sense of horror throughout. There aren't a large number of design innovations; usually we march through the story in 6-panel pages, but certain scenes – such as the actual moment of Lincoln's death or of his being laid out in his deathbed – employ a larger canvas. Geary does an impressive job of integrating a large number of facts and contextual information without seeming as if he was shoehorning stuff onto the page.


HOW A TEACHER MIGHT USE THIS
More importantly, a book like this suggests how History could be taught: as a series of riveting narratives that bubble up through the messy stew of human nature and historical events. There are loads of factual information in the book, but being tied up in the suspenseful story of Lincoln's assassination they come alive instead of laying inert. The President's death was more than one crazy man's attempt at payback; it's tied up in the currents of 19th century America. Comicslit has a series of these books (LIZZIE BORDEN, JACK THE RIPPER), although they seem concentrated on salacious murders during the Victorian era. Still, the book does make you imagine what American History would like as a series of short graphic novels that encapsulate important movements, ideas, and figures in exciting narratives instead of as a Bataan Death march from President to President.


OTHER INFORMATION
Click here for a preview of the book.