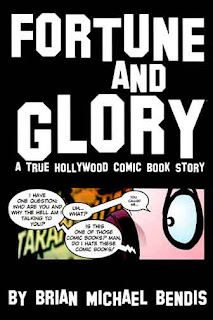 There is something both seductive and repulsive about Hollywood. Moviemakers engage in the most expensive form of art available in the world (except for architecture and whatever it is that Christo does) and extend a cultural reach far beyond what is reasonable or fair. Not only that, I think there is also a related corollary to this fact that anyone who becomes successful in one form secretly hungers to be successful in another: Bruce Willis wants to be a singer; Daniel Day Lewis a cobbler; teachers dream of pulling out a screenplay and finding their names splashed across Variety. I mean, if Joe Eszterhas can do it...

Maybe that's why a story such as Brian Michael Bendis's FORTUNE AND GLORY retains such an appeal even when it is – at least in part – a self-indulgent exercise in Hollywood name dropping. Bendis recounts his adventures attempting to sell his screenplay based on his graphic novel GOLDFISH. The true story requires him to interact with every stereotypical Hollywood phenotype: sleazy agents; ignorant producers; suicidal screenwriters; and manic, profane heads of HBO programming. But more interestingly, Bendis' graphic novel dramatizes how the dream of being a Hollywood screenwriter warps his sense of self and sends him on violent upswings and downswings as his screenplay winds its way through the various purgatories of treatment, pitch and development. No matter how hard he tries to keep humble and remember his comic book origins, the dream and the ego of Tinseltown overwhelm him.

However, for a teacher, there are a number of downsides. In various places there are sexual jokes or references that some parents may object to. Also, the graphic novel is particularly text-heavy. There is no color in the graphic novel; the characters are often engaged in quick, back-and-forth dialogue without much action or any explosions. Despite a well-designed and varied visual style, the graphic novel relies on a pretty sophisticated sense of wordplay and irony for its effects. Students who struggle with reading might be encouraged by either the subject matter, the sarcastic humor, or the visual inventiveness, but then again...maybe not.

Fortunately, the story is told with intelligence and self-deprecating humor. Students who are interested in how movies are made and written might be inspired by the struggles that go on in creating and selling ideas as well as the fact that the main character makes his living writing graphic novels. Bendis makes the enterprise of writing stories seem like the coolest possible profession to enter, despite the mammoth obstacles lurking in the way for those who want to be successful. FORTUNE AND GLORY succeeds in making a graphic novel into an entertaining monologue told by a gifted storyteller about the heady and absurd process of getting your story made into a movie.