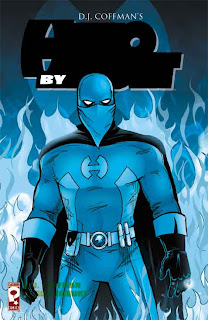 
STORY SYNOPSIS
Jack King is a bit of a screw-up. He’s a good guy and all, but he has no purpose, no drive, no umpf. Jack’s father hires Jack as the superintendent of his father’s run down apartment building, hoping the job will inspire him to excel, to care. Jack could not care less, but he tries his least. While working in the basement Jack finds a chamber, a secret lair, the now abandoned super hero headquarters of HERO BY NIGHT, a long-ago caped wonder who disappeared some fifty years previous.

So Jack devises a plan to sell the old hero’s diary on eBay and make a quick fortune. Things just do not work out quite that easily and Jack finds himself the center of an equally long-forgotten super villain who is dead-set on retrieving the diary, and more importantly the super ring of HERO BY NIGHT. For once, Jack finds a life path that suits him. He has to decide whether or not to take the dangerous, unpredictable, and more difficult path through life. Thus begins the hero’s journey.


REVIEW
HERO BY NIGHT is a nostalgic nod to the old super hero comic, but is modernized with more contemporary art. Poor Jack. He’s such a dolt, especially in the eyes of his father, who desperately wants to make something of Jack. For once in his life, Jack has a place and a purpose and he uses it wisely. The only problem with HERO BY NIGHT is the occasional use of profanity. Nothing kids haven’t heard before but something that can be hard to justify in an elementary classroom. Middle school and high school English classes can get away with more language. The thing is, Coffman used replacement words too, so there is really no reason why the profanity was necessary. Leaving it out would have made it more accessible to elementary-aged school children.

I recommend this for ages 10 and older because of the profanity.


BE AWARE
There are just a couple of incidents where there is a “dammit” and “hell,” otherwise the language is fine. There are plenty of substitution words such as “stinking” and “frigging” and the like.


IN THE CLASSROOM
In his introduction, creator DJ Coffman writes about relating his love of comics and the hero mythology to his young sons. He gave them a stack of comics expecting them to dive right in, but what he got was more apathy than enjoyment. It wasn’t until they sat down and he helped them create their own story that their imaginations came alive.

“I started to ramble a story about a new kid who finds the lair of a hero from the 1950’s, almost as a way to suggest that these kids or myself rediscover the past. He finds a powerful ring, all the hero’s gizmos and gadgets and retro thingamajigs. I put the questions to them – what would they do if they found this stuff? One exclaimed that he’d sell it all and be rich! I laughed, but then I told him, what if you put that ring on and it gave you super powers? Then their minds started to wonder a bit. They’d much rather have the power and help people. One kid said he’d go stop the wars! This was the moment I know I was onto something.”

He certainly was onto something. Within that reflection, comes a fantastic idea for the classroom. Read chapter one to the students, which chronicles the story of Jack and his discovery of a super hero’s hideout. At the end of that chapter, pose the same question to your students that Coffman did to his children: “What would you do if you found a super hero’s headquarters, complete with all the super hero equipment? What if you discover that one of the artifacts, a ring, could give you super powers? Does that change your answer?” What a writing prompt! Students could develop strong, complex stories based on that one prompt. In the end, the students could compare and contrast their stories to HERO BY NIGHT.

My experience with introducing comics to kids, however, is very different than Coffman’s. I have seen kids who hate to read beg for comics in my classroom. I do not just sit kids down with comics; I introduce the stories to the kids. I talk about the characters, plot, and elements they may find interesting, and reasons for them want to read. Then I let them pick. I offer more than superheroes and I offer many books at different reading levels.


OTHER INFORMATION
Wallpaper, cover art, and avatars are available from the publisher’s website.


CHRIS' RECOMMENDATION:
Recommended
I loved the throwback to times-gone-by and the strong monomyth (hero’s journey).