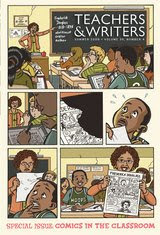 The cover of the journal shows a teacher, pointing to facts about famed abolitionist Frederick Douglass that she has written on the chalkboard. Kids in the seats are barely paying attention. One student is staring up at the ceiling, with a smile on his face that indicates his mind is elsewhere. Another boy, with his tongue dangling off the side of his mouth like Michael Jordan on the way to the hoop, is doodling and drawing with intense focus.
Suddenly, the teacher's shadow looms over the doodler. A look of panic crosses his face as the teacher grabs the paper and glares first at him and then at the artwork. Suddenly, in the final frame of this cover laid out like a comic, the teacher holds up the work, which is a student-created comic book about the life and times of Frederick Douglass from his times as a slave to his emergence as a leader. It turns out this student was listening after all, and was absorbing the information all along.

But, like many young learners, he just needed another way to show what he knew. Give him a standardized test, and he might not do so well. Hand him a blank comic template and knowledge flows.

As editor Susan Karwoska notes in her introduction, Teachers & Writers is attempting to "explore how writing and reading comics can strengthen writing skills, spur the imagination and boost literacy in the classrooms from kindergarten to college and beyond."

And that it does, moving from Michael Bitz's explanation of the success of The Comic Book Project as a way to enhance literacy through social action in many urban schools to David Morice's take on how comics can infuse poetry units to an interview with Ben Katchor, who contributes comics to major magazines and teaches the concept of "visual narrative" at The New School.

The articles here are rich with anecdotes, but also bundled with plenty of examples and illustrations. The authors move into the pedagogy of comics in its many forms and many layers. Taken together, this Teachers & Writers edition puts down a pretty solid foundation for the rationale for graphic novels and comics for students of all ages and all backgrounds.

Bitz sees it all the time with The Comic Book Project. Bitz writes: "When I see the spark in a child's eye as he expounds on the gears of his superhero's magical helmet, I glimpse the gears of his own mind working, pushing forward to communicate thoughts and explore identities."

That just about says it all, doesn't it?
Posted by admin at 2:35 PM