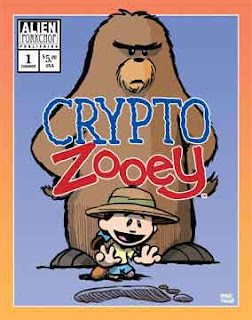 So, CryptoZooey #1 was a hit at Comic-Con – and it was Well. Frigging. Deserved! Charming and funny, there is a little related-something akin to my youth’s sacred WHERE THE WILD THINGS ARE that called-up my inner monster-fearer from below my inner dork that made Sarah and Steve Troop’s comic immediately endearing. It’s no stretch of imagination to understand what won over Comic-Conners when it is marketed as “CryptoZooey. A girl. A quest. And the monsters that help her.” Monsters rule.

Now, Zooey’s parents were cryptozoologists, which as we all know are the people who told us all that monsters don’t exist. Liars! – we learn. On one of their voyages, however — if I understand right — they just don’t come back, so little Zooey must be raised by her grandmother. But when grandma croaks, Zooey must live with a distant and mysterious relative – a Mr. J.D. Leeds.

It’s hard to say anything more about the storyline without spoiling it, but chalk-up a little Lemony Snickett and a dash of MonsterQuest and you’ll get the idea.

Steve Troop’s art is, IMHO, reminiscent of newspaper strips like Calvin & Hobbes. I say this because Zooey looks, well, like a transgendered Calvin. But the degree of detail he inks into the background, into newspaper clippings and wide-panel haunted scenery, is just great. The expressions are hilarious and the bubble-logue ingenious (or, at least, super cute [refer: Jackalope]). As an author and illustrator he obviously enjoys his craft, and the paneling — albeit busy — never seems like it were tediously done: it doesn’t take itself too seriously, which means that there is abundant tomfoolery and good stuff – like the sound of thunder! KRAKATOOOOOM!


AGE RECOMMENDATION
Michael’s Rating: All Ages
Except for maybe the appearance of the Jersey Devil, there is nothing here at odds with an All Ages recommendation. Were I to catalogue a subscription to CryptoZooey, I would have it routed to the J (juvenile) section and displayed somewhere prominently. The monsters look friendly; there is neither swearing nor violence (well, except for a burning head, but that is easily remedied in the presence of a fishbowl) – and, gosh, it’s even educational. A teaser in the back defines CRYP-TO-ZO-OL-O-GY and its subjects, “cryptids.”

“Feel free to show off your new vocabulary to your parents, thus convincing them that simply by reading CryptoZooey, you are becoming smarter, resulting in them promising you a copy of issue #2!”


FINAL RECOMMENDATION
Highly Recommended
Sarah and Steve Troop have a special thing here. I recommended a subscription to my colleague in Children’s and hope she takes me up on it, as I am just as excited for Issue #2. CRYPTOZOOEY is deviously educational, reinforcing brain-cells under the cover of entertainment. And unlike my copies of Fables (don’t ask), parents would welcome the Troop’s comic into their library. It’s a fun read.