UNDERSTANDING COMICS AS LEGITIMATE LITERATURE: A PRESENTATION AT DEFCON 7

Comics are literature, legitimate literature, and despite the cries of silliness from the detractors, comics may very well be more influential in defining reading habits than traditional fiction. The research clearly demonstrates that children’s motivations for reading are defined by several factors, including choice. When children are given permission to chose their own reading, motivation for reading skyrockets. Do you know what consistently rates at the top of children’s preferred reading? Comics and magazines.

Whenever I tell people about The Graphic Classroom and my focus of using comics in my classroom, I hear a familiar story. It goes something like this:

“I (or son, daughter, grandkid, niece, nephew, cousin) just hated to read. Then I (or he or she) started to read comics and it changed everything.”

This common theme is reason enough to study comics seriously and conduct research on the impact of comic literature in the classroom. When I talked to illustrator Steve Erwin at DefCon 7, he asked me if he could present with me, having worked for Capstone Press to create some historical comics for school-aged children.

Steve and I talked about the dumbing down of stories, especially those stories created for elementary children. We cautioned those in attendance about the pitfall of treating 10-year-olds like … 10-year-olds, and about making public service announcements and after-school specials disguised as comics. Children, as you well know, need authentic literature, powerful stories that connect on a deep, emotional level – stories that engage readers, stories that feel real.

With that authenticity also comes the delicate balance between art and audience. I do not advocate for the sanitation of art just because the audience consists of children or teens. However, creators and publishers must be keenly aware of the content and audience when creating comic literature that may be used in the classroom. Creators should ask themselves: “Do I want my work to be in schools?” If so, then that creator must consider issues such as: profanity, big breasts, nudity, near-nudity, smoking, drinking, drugs, crime, sex, sexual themes, hyper-sexualization, religion, and magic.

Recently, illustrator George O’Connor contacted me. I had reviewed JOURNEY INTO MOHAWK COUNTRY and had “Not Recommended” it. I based that review on one panel where three Native American ladies were shown topless from the side. There was also a portrayal of the main character drunk. O’Connor contacted me and asked to discuss the review. His main argument was that all the research pointed to the fact that the Native American women in this region were accustomed to wearing only a loincloth in the summer, just like the men. His portrayal was factual and authentic and to cover them up would be to be disingenuous. He did, however, consider the issue and only a breast was exposed and it was from the side.

In the end, I agreed with his argument and changed my recommendation to “Recommended with Reservations”. I also changed my age recommendation, increasing it to “Middle School”. This is a perfect example of how delicate the balance between art, authenticity and education is with comic literature.

I thought it appropriate for the audience to hear from kids who read comics. So I brought some children ages 8 to 13 and they each spoke about their favorite comics and why they are drawn to those particular story lines. I followed this information up with some of the research that supports the use of comics in the classroom, all of which will be discussed in my Master’s thesis.

More and more teachers are discovering the power of comic literature in the lives of children and adults. While the use of comics in the classroom is relatively new, it is gaining momentum. With that said, here is the comic-inspired photo essay of the DefCon 7 experience. 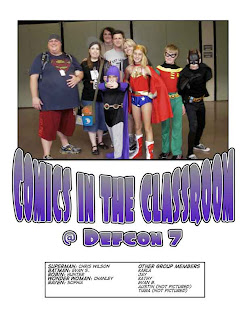 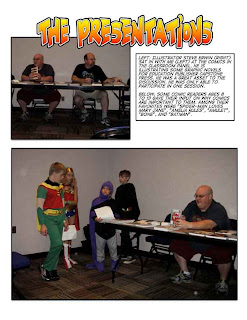 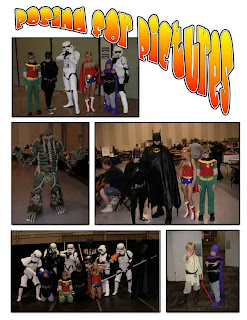 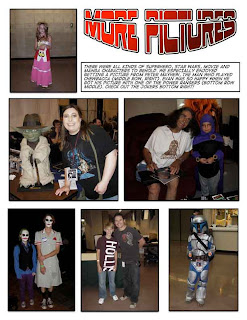 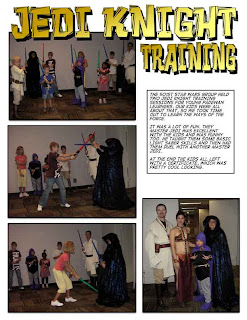 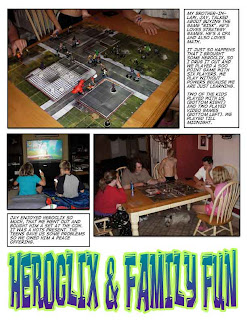 (The photo essay was created using Comic Life,
which would be an excellent program to use in a
technology-based classroom.)

I love Understanding Comics. Looks like a lot of fun at the conference.

Yes it was. Scott McCloud's book is great. I just got his book ZOT!. Very excited to look at it.

I'm glad you shared your experiences with us, and I agree that there is that familiar story: the kid who only found reading interesting when reading comics, and then graduated to other novels later on. Why do we ignore that?
Thanks for all the work and all the exploration you do in this field.
Kevin