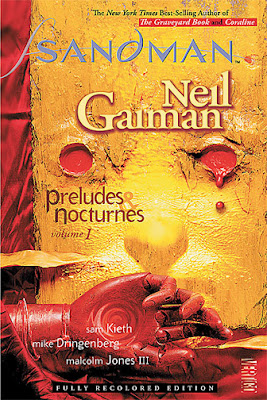 By Kevin Hodgson
Staff Writer
STORY REVIEW
There are a handful of books that I purposely tuck away from the eyes of my children when I am done reading, for fear that the allure of a comic book will expose them to some unsettling things. THE SANDMAN: PRELUDES & NOCTURNES is one of those books. Which is not to say this comic collection is not a terrific series worth all of the hoopla it has been given over the years.
THE SANDMAN is an example of how comics can rise above the funny pages, as novelist Neil Gaiman shows with his astute writing in this series about Dream, the God of the night, who gets captured and imprisoned by humans (who really wanted his sister, Death) and must now embark on a quest for revenge and recovery of three magical items that have been stolen from him. Dream, also known as Morpheus and a slew of other monikers taken from various world cultures (including an amusing Mars reference), is not what you expect. This god is ruthless, yet compassionate. When asked, he helps humans in the night by relieving their suffering of nightmares.
The stories in this collection of THE SANDMAN comics begin with his imprisonment and end with his sister, a beautiful and powerful goth-like Death, reminding him of his role in the world, even as she gently snuffs out the lives of those around her. What makes the stories so unsettling is the violence and chaos that erupts all around the world as Dream is no longer in charge of the night, and the nightmares take over. In one story, in particular, a madman in possession of one of Dream’s magical items unleashes the goriest, scariest and strangest scenes I have come across in comics. Even I was unsettled. It is not for children. And yet, Gaiman’s writing takes THE SANDMAN to such interesting places (including the depths of Hell), and you can see that his vision for Dreams is deep and rich. So, keep it away from the kids, but savor the storytelling here yourself.
ART REVIEW
There are a couple of illustrators working with Gaiman on this collection. Most, like partners Mike Dringenberg and Malcolm Jones III in the story “24 Hours,” will bring you to the edge of your seat, and then force you to look away as madness unfolds in the world around the nightmares. My favorite story – “The Sound of Her Wings” – has Death visiting Dreams by helping him break out of his depression over the state of the world. The artwork captures the siblings so perfectly, in shades of black and blue. One interesting note: the artists in this collection (and throughout THE SANDMAN, I think) use fonts and colored text bubbles to great effect, shading the gods’ words differently than humans, for instance. It is an ingenious technique that uses the medium of comics as a storytelling device in wonderful ways. (Slight tidbit: the Dream character looks an awful lot like Gaiman himself.)
IN THE CLASSROOM
This series does not belong in any K-12 classroom. Period. I hate to say that because the writing is so rich and the characters are so well-defined. But the violence, profanity and sexuality are too much. It’s possible that a college-level course might find a home for THE SANDMAN, but even then, the professor would have to make sure students were aware upfront of the content they were being exposed to. Of course, this raises an interesting topic of violence in storytelling, and what role does uncomfortable content have in the books we read.
MORE INFORMATION
Format: Paperback
Pages: 240
Publisher: Vertigo
ISBN-10: 1563890119
ISBN-13: 978-1563890116
MY RECOMMENDATION
Sad to say, I cannot recommend this book for the K-12 classroom. The violence, profanity and unsettling content make it inappropriate for those students. It might have a home in some college courses, but even then, I would have reservations. Still, if you like graphic novels and comics, THE SANDMAN is a modern classic that is worth your time, even if you never share it with anyone else.
Posted by Mr. Wilson at 11:44 AM