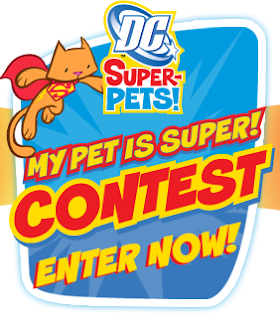 SUMMARY
What do Batman’s dog, Superman’s cat, and Wonder Woman’s kangaroo all have in common? They’re Super-Pets, of course! Picture Window Books (a division of Capstone) is proud to introduce DC Super-Pets, a new line of adventure books for young readers featuring the crime-fighting pets of everyone’s favorite super heroes.
The first six books in the series launch in January 2011: The Fastest Pet on Earth, Heroes of the High Seas, Midway Monkey Madness, Pooches of Power, Royal Rodent Rescue, and Super Hero Splash Down. The series illustrator is Eisner Award-winning DC Comics artist Art Baltazar.
BOOK INFORMATION
Reading Level: Grade 2
Interest Level: Grades 1-3
Guided Reading Level: J
Pages per Book: 56
Format: Reinforced Library Binding
WRITING CONTEST
To celebrate the launch of the new series, Picture Window Books is sponsoring a writing contest for students in grades 1-3. Children enter the “My Pet is Super” contest by writing an article for an imaginary newspaper, The Daily Planet, about why their own pet is super. Art Baltazar will create an illustration of the winning Super-Pet that will appear in a future book in the DC Super-Pets series. The winning student will receive the original illustration as well as copies of the book. Authors of the top 50 entries in the contest will also win free books. For complete rules and to enter, visit Capstone Kids. The contest runs from Jan. 15–Feb. 28.
The DC Super-Pets series features the crime-fighting adventures of the pets of favorite super heroes from beloved DC Comics: Superman, Aquaman, Wonder Woman, Batman, and Green Lantern. These intrepid Super-Pets—Krypto the Super-Dog, Ace the Bat-Hound, Streaky the Super-Cat, Beppo the Super-Monkey, Jumpa the Super-Kangaroo, and their friends—save the day and foil the evil plans of the universe’s most dastardly super villains.
The books have been specially designed for children just learning to read independently. Included in the endpapers are illustrations of all the Super-Pets in the series (both heroes and villains), jokes, and a guide to the meaning and pronunciation for each book’s most challenging words.
DC Super-Pets is the second project Capstone and DC Comics have collaborated on in recent history. The publishers launched a successful partnership in 2008 under Capstone’s Stone Arch Books imprint to publish DC Super Heroes, an original book series based around DC Comics’ iconic characters Batman, Superman, and Wonder Woman, and, coming in Spring 2011, Green Lantern and the Flash.
Posted by Mr. Wilson at 11:59 AM