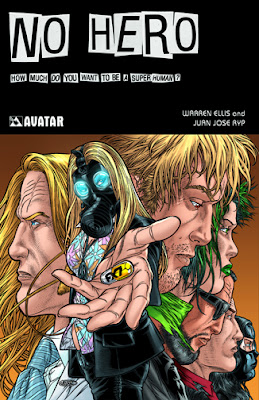 
I’m a big fan of the anti-hero archetype because it seems more practical for someone to struggle between personal and societal morals, and these are sometimes overlooked in the superhero genre. I also feel much more connected to the anti-hero since any signs of weakness means the character is imperfect and I can empathize or at least try to deconstruct the character having realistic actions and thought. To put it simply, Warren Ellis doesn’t tip-toe around anything in NO HERO and really brings the anti-hero into a practical spotlight.
STORY REVIEW
NO HERO takes place in the real world and superhumans have been around since the 1960s, fighting against increasing violence and street crimes. Our protagonist, Josh Carver, has been patrolling the streets on his own to be noticed by the superhuman recruiter, Carrick Masterson. Carver explains he’s no hero (he accidentally killed a mugger by landing on him from a two story building) and wants to make the country a safer place and would do absolutely anything to become a superhero. Masterson is pleased with Carver’s determination and recruits him.
Carver is subjected to tests and a complete biological transformation that comes in a small yellow-white pill. If Carver survives the transformation, he’ll have super powers. Carver does survive but his entire body has deteriorated and his official superhero form makes him look like a mummified corpse. Interestingly enough, even though Carver takes his new physical appearance badly he completely disregards it once he realizes he has super powers. Carver is also not effected at all by the fact that he needs to wear a suit and metal face mask to conceal his entire body, or the time when his mask is blown off by an outraged citizen during his public initiation and his mummified face is shown to everyone in the nation. All Carver simply says is “There’s nothing wrong with me. I’m a superhuman now.”
However, Masterson reveals his true intentions of running a superhuman agency and in the end, Carver, as well, reveals his true intentions, and explains why he continuously says he’s no hero.
ART REVIEW
The colored illustrations are beautiful but also very violently graphic. I find this art style very appropriate and complimentary to Ellis’ writing, especially on a subject that is talking about violence. Seeing something visually graphic really brings in the realistic and practical aspect of the story which I feel is something that Ellis meant to intend.
AGE RECOMMENDATION
My Rating: College

Publisher’s Rating: 18+
BE AWARE
Carver rips out a superhero’s spine and attaches it to his hip to resemble a phallus. This may be an extreme shock to some readers but I found this to be the climax of the graphic novel. This came to reveal who Josh Carver really is as well as his psychological damage before he became a superhuman, and how this damage could have been transferred once he became a superhuman. Just this image itself explains a lot because I could hardly believe Carver was so accepting of his transformation into a mummified corpse (which also left him castrated) and continued to think everything would be okay just because he had super powers. There’s definitely a certain reason why Carver remained as the “ticking time bomb”.
Aside from the very graphic illustrations, curse words are frequently used.
IN THE CLASSROOM
The main thing to keep in mind are the parallels Ellis is trying to reveal through this story in regards to what the reader knows or the reader has experienced. There are large themes like terrorism and politics but also smaller themes like man vs. himself, morality, and sacrifice.
There is definitely a different approach or perspective Ellis gives through the use of the superhero genre to construct this story and I’ve found that Ellis’ anti-hero has a touch of sadness to the character that may have readers sympathizing.
MY RECOMMENDATION
Recommended