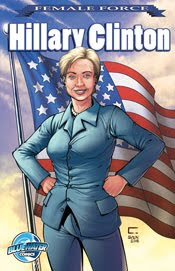 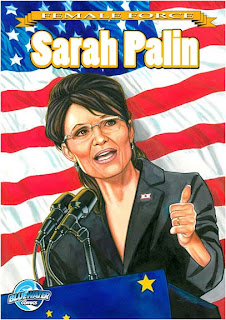 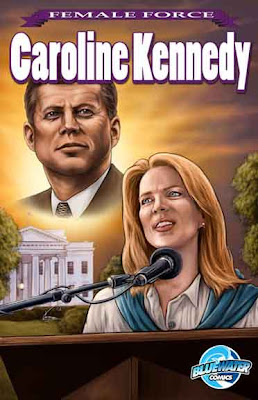 
REVIEW
I’ve been collecting the biographies published by Blue Water Productions since the Barack Obama and John McCain comics hit the newsstands. Biographies are an important genre and the comics medium is a expressive way to tell a person’s story. For Women in Comics Week (a month-long celebration for us), I thought it prudent to review some of America’s most influential and political women.

The FEMALE FORCE series offers 22 pages of actual story for each woman (Hillary Clinton, Sarah Palin and Caroline Kennedy), making it difficult to delve the depths. Be that as it may, FEMALE FORCE makes a solid effort to give a balanced perspective to each of these powerful, and sometimes controversial, ladies.

Bailey struck a nice balance in showcasing each woman’s strengths while addressing problems each made. Even still, the purpose of the series is geared toward showing the accomplishments and influence of women taking their place on the political landscape.

Comics of strong female leaders are important to girls and women, and for society. Accessible biographies give rise to the study of females as integral parts of our society, and help girls become strong leaders in their families, communities and country. While studying these women’s accomplishments, it is also important to study their miscalculations and mistakes. Blue Water’s biography comics show both sides of the women well.

The stories, however, do fall short in two aspects: biographer interjection and caricatures. Throughout these stories (and in Michelle Obama’s biography, too) Bailey the biographer continuously inserted himself (both narratively and artistically) into their stories. Bailey was not only the narrator (done in first, second and third person if you can imagine it), but he was also an illustrated character with dialogue.

In some places this served the story well as it did in the first page of the Palin comic. Here it set the tone and acted almost as a foreward to her biography. He showed humor and demonstrated his concerns of objectivity. Unfortunately, Bailey did not confine his persona to a foreward or afterward. He interjected his own feelings and often apologetically lamented his fears of being criticized.

Ultimately, his introduction as a character deflected the story away from these women and distracted the reader from the women he was showcasing rather than enhancing the narrative. Not only is that a disservice to these power brokers, but considering the huge hurdles women go through for equality, it disingenuous.

I think Bailey knew this. In FEMALE FORCE: CAROLINE KENNEDY, Bailey uses his own character to talk about Kennedy’s revelation that as a celebrity, to become a photojournalist would shift the focus from the subject of the story to the photojournalist. Interjects Bailey:

“Hopefully I will someday learn this lesson myself, and not make myself the subject when the beauty is, perhaps, somewhere else.”

To further demonstrate Bailey’s flippant approach to what should be a more serious and authentic view of women in power, at the end of Clinton’s biography, Bailey used a covert curse word: “And good. It’s about #&@ing time.” There is absolutely no reason for any writer to use an f-bomb reference in a serious political biography, unless quoting someone else, which is not the case here. I have no problems with the f-word itself in literature when it is appropriate to the subject and the characters. To do so in this case is to not treat the subjects with respect, even if you are arguing for them.


ART REVIEW
My second critique is with the art, which lacks a certain gravitas. The women are often heavily inked, especially around the mouth, giving them the appearance of wrinkles and making their smiles seem contrived, old, and tired. I find they often seemed more like caricatures of themselves. The covers, on the other, were generally quite realistic and appropriate to the women they portrayed.

In Kennedy’s story, the artist brought the story full circle by connecting two images. I noticed it right off and made notes. In an early scene, Kennedy’s life is described by the death that surrounds her. It is an unfortunate reality. We see the tragic loss of a child and Kennedy’s mother lying in a hospital bed while her two older children play with blocks. It is a sad and poignant moment that will later define Kennedy.

In the spread depicting her marriage, graduation and birth of her children, the same scene is set, this time with Caroline Kennedy holding her child in a hospital bed, her two other children playing with blocks. It’s a brilliant and delicate scene that resonated with me and connected the story together.


BE AWARE
At the end of Clinton’s biography, Bailey used a covert curse word: “And good. It’s about #&@ing time.” Other than that, there was no inappropriate or questionable content. There is really no reason for any biographer to use an f-bomb reference in a serious political biography, unless quoting someone else, which is not the case here. It further demonstrates Bailey’s flippant approach to what should be a more serious and authentic view of women in power.


IN THE CLASSROOM
Social studies, political science, and feminist studies are all no-brainer subjects with which to incorporate the FEMALE FORCE comics. The brevity of the biographies give students a quick look at these women and give rise to further investigations.

The heavy use of all three narrative styles make these books apropos for the English or journalism classroom. Not only can these be used to distinguish between the different styles, for good or ill, but also the objectivity of the biographer and how his personal opinions can color the story. I think it is a good opportunity for a creative writing class to study the use of profanity in literature and dissect when it is appropriate and when it is not.


CHRIS’ RECOMMENDATION:
Appropriate
While I am critical of the narrative style and the presence of the biographer from a writing point of view, I see great possibility with using these books with students and would not hesitate to use them with students.
Posted by Mr. Wilson at 7:27 AM