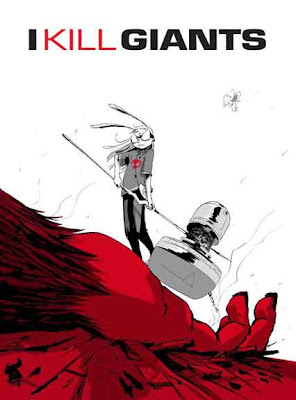 
STORY REVIEW
Barbara Thorson is one freak of a fifth grader. She wears animal ears to school (mostly bunnies but her repertoire includes various woodland creatures), is a formidable and unforgiving DM (that means she designs and controls the adventure in the role playing game, Dungeons & Dragons), converses with pixie-faeries, is an all-purpose and cynical smart aleck … and she kills giants. Or at least does so in her imagination.

Barbara has little tolerance for teachers or administrators, or anyone else in the world as far as that goes. She is a disconnected kid who is intelligent beyond her age, but aloof and angry. Her mother is dying and Barbara cannot face the fact. Her sister is raising her and her brothers, all of whom are overwhelmed and indignant to anyone around them who might care. She was sent to the principal for reading during a career day presentation and general rudeness, and the exchange with her principal is the perfect illustration of Barbara’s character:


Barbara: “You know we’re never going to move forward in our relationship if we only meet at your place.”

Principal: “Neither of us wants to be here, doing this, Barbara. I have a school to run. You have lessons to learn.”

Principal: “So can you tell me in twenty words or less why you were rude in class?”

Barbara: “I wasn’t. I was reading quietly until Ms. Dean asked me a question and then I answered it. Politely.”

[Actually what she said when asked to participate in the motivational speaker’s presentation was: “I find giants. I hunt giants. I kill giants. So you’ll forgive me if ‘motivating’ a room full of losers with no self-esteem out of their hard earned money doesn’t hold much interest for me.”]

Barbara: “Words. Following directions is the key to success.”

Principal: “Fine. I tried to be nice. You need to fly right, Barbara. Stop talking back to your teachers, and enough with the ‘giant killing nonsense.’ Or we start calling home.”

Barbara: “’Nonsense.’ With respect, principal Marx … until you’ve actually fought a giant … until you’ve looked into its eyes and seen the horrors that crawl behind them … until you’ve plunged your broadsword into their arteries and felt the wet spray of victory wash over you, intoxicated by the steaming perfume of spilled entrails … you really have no right to judge me.”

I love this kid. I even like her sass-back, but I especially like her spunk and spirit and her obvious intelligence. Barbara is a real character who is obviously hurting and needs someone who enjoys her wit and repartee, and appreciates the things she loves. Instead, what she gets in life is strangeness.

Barbara’s eccentricity brings about bullies, one giant of a female bully specifically. However, bullies are not Barbara’s real problem. She is preoccupied with, and afraid of, death. The thoughts consume her. Her fear is personified in the form of creatures. When she gets off the bus one day, Barbara witnesses harbingers, death bringers. The very next scene she confronts her bullies destroying up an item of hers. When her sick mother calls out to Barbara from her death bed in the bedroom upstairs, the child runs. The one day Barbara actually sees her mother, the poor woman is rendered (in what can only be Barbara’s perception and not reality) as a beastly, skeletal, screeching wretch.

I’m not convinced the giant she battles, harbingers, or the pixie-faeries are real. I suspect they are just part of Barbara’s imaginative attempt to flee from the painful realization of her dying mother. They are metaphors for Barbara’s true feelings. While it makes for an interesting class discussion (one that is more insightful and educational than debating if one is an Edward or Jacob supporter) it is incidental if they are real or imagined. One could, indeed, make the case for either side.

I prefer, however, to see them as part of Barbara’s psyche and her childlike emotional state trying to make sense of the suffering inside and around her. Barbara needs those creatures for her life to have purpose and to give her an escape.

A narrative that gives such depth is what makes I KILL GIANTS so remarkable. This story reminds me of the film, PAN’S LABYRINTH. The same discussion (are the beasts real or imagined?) was a favorite topic among film lovers. With I KILL GIANTS, there is so much to sink one’s teeth into: metaphors, psychology, and a heroic journey. Sprinkle that with clever banter and some D&D geekness and what is produced is a taut and unforgettable comic.


ART REVIEW
Ken Niimura’s art is a manga-inspired, black and white journey with hand drawn panels and clean panel fluency. He did seem a bit preoccupied with full frontal nudity, but that might be explained by his creating mostly for a European market, an inference I made after reading the “Behind the Scenes” afterward. 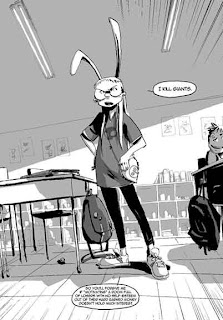 BE AWARE
I KILL GIANTS has cursing aplenty throughout the storyline. Appropriate for the characters? Absolutely. Teens have filthy mouths, but it is still enough that most teachers should read every word before making a decision to use it with students. Ass, goddamn, bitch, son of a bitch, and pussy are the worst that I recall. There are no f-bombs. Also note that there is some innocent, full frontal male pixie-creature nudity.


IN THE CLASSROOM
IKG is a top contender on my Favorite Comics list. However, I have reservations in its use in the secondary public school. If one teaches in an alternative high school program, then IKG is probably the perfect book.

There are teachers who use WATCHMEN in high school and so there is a place for IKG in the public high school literature class. Its use of metaphors is easy to understand and interpret without being trite. The internal struggle is powerful and I think this book, unlike many others, taps into interests of both genders very well. The strong female protagonist is a good character study for girls why also maintaining interest for boys.


MY RECOMMENDATION:
Highly Recommended with Strong Reservations
I KILL GIANTS is a hard book to review. The content is robust, apropos to the modern student, and worthy of literary study. On the other hand, it has strong language and some scenes depicting penises (of creatures not humans). Nothing is gratuitous or out of character, but it is controversial just the same. Know your school and community. If you use it in your classroom, please drop us a note. We would love to know how the students and all those other important people are receiving it.
Posted by Mr. Wilson at 8:39 AM

Well that settles it; I need to finally read this book :-) Thanks for the review!

Hey! Great review, just wondering if you could review the art a bit more in depth? I'm trying to see if this would be a good fit for an art lesson on "Speaking One's Mind." Let me know here, or at erikaheilmann@mail.adelphi.edu Thanks! --Erika