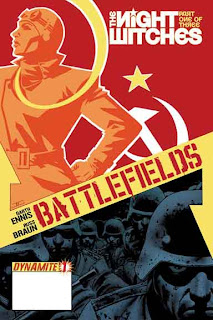 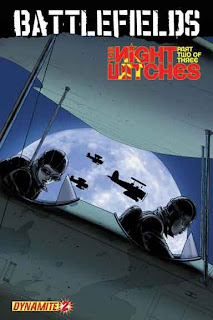 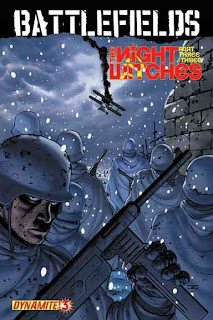 
STORY SYNOPSIS
In the summer of 1942, after the German army settled into Soviet territory, the sickle and hammer used every available means to purge the Germans from the motherland, including The Nachthexen, which translated from German means The Night Witches.

This band of all female pilots and crew, officially known as the 588th Night Bomber Regiment, ran nighttime psychological (or harassment) raids upon the Germans leaving the soldiers nowhere to rest, no where to go as they fought Soviet commandos by day and were surprise-bombed by The Nachthexen by night.

The sorties were successful but dangerous as the ladies flew loud, antiquated biplanes, which meant the Germans could detect them before their bombs were dropped. Cleverly, the ladies cut their engines early and glided in to drop their bombs, then restarted their engines and flew back to get ready for another attempt.


REVIEW
Garth Ennis’ narrative carries two simultaneous storylines: that of the Witches, and one German unit. As has always been the case for females in significant or important roles, these ladies are mocked and even hated for their important roles in the world. Ennis does not hide behind the ugliness, but shows us an authentic, nasty story of war.

These courageous women stand at attention while their new commander, Guards-Major Aleksandr Lukin of the 41st Guards Fighter Air Regiment makes clear his disdain for his new assignment.

“My squadron – who are currently out of sight laughing, by the way, because they know I’ve got to stand here in front of you and perform this ludicrous duty – my squadron are engaged in trying to stop the Nazis, which is hard enough in the first place, without you lot showing up and getting in the way with your … your … your female requirement.”

Equipped with inferior planes and no support, the ladies engage in their bombing escapades only to find the Germans can hear them coming. It’s up to the women to solve their own problems, and they do so by taking risks, risks that are amazingly successful, creative and crazy.

Ennis is a gritty writer – a creator of dirty, bloody, realistic stories of true characters and disgusting humanity. There is a reason THE NIGHT WITCHES carries a mature rating on the cover. The story is about war and Ennis spares no ugly detail. It is stark honesty that makes THE NIGHT WITCHES so powerful. Not only is the story profoundly brutal, but it is genuine and honors the women it is about. They crash, they die, they kill, they get raped. But many of the women make it through and significantly impact the outcome of the war. It is their heroism – and not pitty-inspired heroism for being a female in a war, but heroism in the patriotic and self-sacrificing sense – that makes the war effort winnable.

The Night Witches are a squadron of women who are truly worth celebrating and studying and the Ennis/Braun comic is an ideal way to glorify the strength of woman and their contribution to world events, even when those contributions are little known and rarely acknowledged.


ART REVIEW
Russ Braun took a stouthearted script and inked a cinematic period piece just as brutally as Ennis. The expressions of the characters – from the body language of the women to the pathos of the single conflicted German soldier, to the seething and scornfulness of the commanders at the soldiers they feel are inferior – is emotive and haunting.


BE AWARE
This is a mature war story where blood is spilled, entrails are strewn about, eyes are gouged, heads punctured, prisoners raped, suicides committed, and knives are stuck in the bellies of enemies. The cursing is real and appropriate for the subjects but unseemly. Remember, I said Ennis is gritty. The characters curse like soldiers of war often do.


IN THE CLASSROOM
THE NIGHT WITCHES is 90-some pages of World War II reality and is at home in a class studying the war, the psychology of war, or the female rights movement. Because of the brutality, it would likely need to be a college-level class. Given that level of study, THE NIGHT WITCHES is an outstanding title to dissect and discuss. Questions might include:


OTHER INFORMATION
BATTLEFIELD is a serious of war stories, which include THE NIGHT WITCHES. There is a hardcover edition of the entire BATTLEFIELD story lines. All three of the NIGHT WITCHES issues are collected in a single paperback edition.


CHRIS’ RECOMMENDATION:
I highly recommend THE NIGHT WITCHES for mature readers such as college students. The story is outstanding. However, I do not recommend the book for the high school classroom, as the material is so savage.
Posted by Mr. Wilson at 8:52 AM