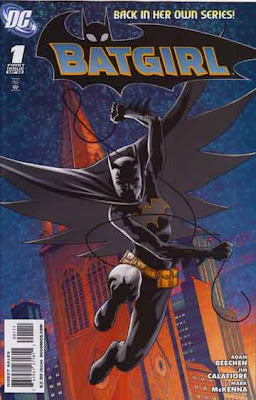 REVIEW
Those in the bat-clan are known for their neuroses: deep-seeded pathology characterized by traumatic, calamitous events. Bring out your DSM-IV kids, because entire courses could revolve around the study of the bats.

In this series, Batgirl (Cassandra Cain) is out for revenge against two assassins. The first is Deathstroke who injected her with a mind-bending drug, making her an invaluable and insatiable killer. The second head she seeks – and more importantly – is that of her own father, David Cain, who raised her (“trained” is more like it) as a ruthless, devastating atom bomb of an assassin.

During her quest for revenge, Batgirl comes across two other females who seek these same men for similar reasons. Revenge, it seems, is not only driven by pain, but is epic in scope and swaddled in suffering.

During this six-issue miniseries, we learn David Cain’s abuse of Cassandra (and other sisters) was pathological and his conditioning relentless. David deprived her – but not the other sisters –of the ability to speak or read, limiting her social interactions and focusing her every moment on the art of death and destruction. She was his prize machine. Every decision was calculated to create a monstrous assassin.

Throughout the six issues, Cassandra not only has to deal with her equally neurotic and vengeful sisters-in-blood, but she must stop Cain and Deathstroke from building a new army of female foe hammers.

Cassandra risks her relationship with Batman et al. – the only real family she’s ever experienced – in order to kill her father. To do so she has to deceive Batman and seek her own justice outside the Bat’s ethical boundaries.

In issue #6, Cassandra finally meets up with her father and the two engage in a no-holds-barred physical and psychological showdown. In an emotional and important climactic ending, Cassandra beats her father leaving him hanging over the side of a building. Unsure what to do she sits and thinks all the while hearing his pleas for rescue and prison. After finally deciding on the high road, Cassandra rushes to the edge to spare his life as David’s grip loosens and he plummets to the concrete below. Batman and Robin then emerge.

Batgirl: “I waited – I should have –
Robin: “After all Cain’s done to you, the fact that you moved at all is impressive.”
Batman: “Agreed. You didn’t kill him and you could have. After everything, you tried to help. You’re free of the worst things he taught you."

Of all the people to turn to, the bat-clan is the group mostly likely to understand and empathize with Casandra’s profound pain. They, too, know what it means to be seething and tortured and consumed with revenge. With them (Batman, Robin, Nightwing, and Alfred) she has a home and a family that knows just what she feels like.

BATGIRL works because the story is encased in deep emotional scaring and pain, something that many readers – be they teens or adults – live with. The story is not about caped heroes and super villains. It is about characters and how they, despite their costumes, are like us. (Batman and the accompanying characters are especially connected to the human condition because they don’t have super powers at all. Everything they do is brain and skill and gadget.)

Cassandra does not need saving by the big strong man, and she was not forced into traditional gender roles. Batgirl is her own woman who, along with any hero, journeyed with the help of others, but eventually prevailed on her own. She chose her path and broke free from the emotional and physical subjugation of her father. It was then that she could move forward and join a new family, a real family of masked and caped heroes with a purpose.


ART REVIEW
Calafiore’s art is sharp and astute. His panel movement is seamless and flows organically. The pain and emotion of the characters is dynamic. Casandra’s mask covers her mouth, and her eyes are darkened. The only defined element is the hand-sewn seam running across her nose and down the corners of her mouth – a symbolic and eerie mask that tells a lot about Casandra and her pain.

The darkness of BATGIRL’s story is probably best suited for high school students and adults. However, I do not discount BATGIRL’s use in the proper middle school setting.


BE AWARE
The story is dark and full of violence, death, hatred, revenge, and childhood abuse.
IN THE CLASSROOM
BATGIRL is an authentic story of one girl who is trying to make sense of life and break free from the childhood pain she experienced. Casandra is also seeking redemption from the death and pain she inflicted on others while a brainwashed, drug-induced assassin. The hauntings of real life are exposed and raw, but at the same time are handled with maturity. Casandra finds a path to redemption and forgiveness, at least in the eyes of others. The hard part is, of course, in forgiving ones self.

Students will undoubtedly be engulfed in BATGIRL and find themselves thinking about the story outside of class and school. If handled properly, students will have the opportunity to delve into universal truths and literary themes while still reading a contemporary work that speaks to young persons.


OTHER INFORMATION
BATGIRL: REDEMPTION is available as a trade paperback. The story continues in an ongoing BATGIRL series, which comes highly recommended by my comic guy.
CHRIS’ RECOMMENDATION:
Highly Recommended
Posted by Mr. Wilson at 9:29 PM